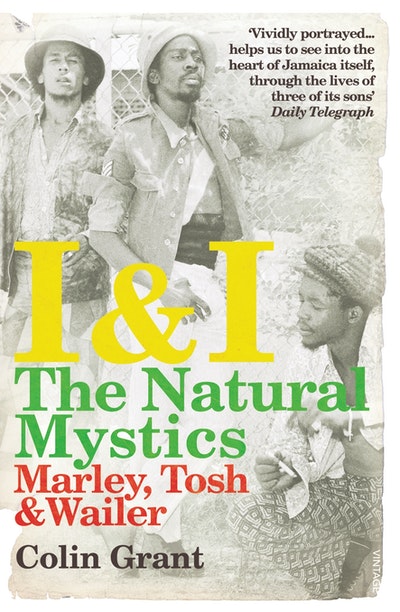 I & I: The Natural Mystics

The history of the original Wailers - Tosh, Livingstone and Marley - as never before told.

The history of the original Wailers - Tosh, Livingstone and Marley - as never before told.

Over one dramatic decade, a trio of Trench Town R&B crooners, Peter Tosh, Bunny Wailer and Bob Marley, swapped their 1960s Brylcreem hairdos and two-tone suits for 1970s battle fatigues and dreadlocks to become the Wailers - one of the most influential groups in popular music. Now one of our best and brightest non-fiction writers examines for the first time the story of the legendary reggae band.

Charting their complex relationship, their fluctuating fortunes, musical peak, and the politics and ideologies that provoked their split, Colin Grant shows us why they were not just extraordinary musicians, but also natural mystics. And, following a trail from Jamaica through Europe, America, Africa and back to the vibrant and volatile world of Trench Town, he travels in search of the last surviving Wailer.

'In Grant's hands life in Trench Town in the 1960's is energetic and theatrical, rich in comedy and tragic irony...This brilliant book is not just about Jamaica, but about ourselves' Guardian

Colin Grant is a historian and author of four highly praised books: Negro with a Hat: The Rise and Fall of Marcus Garvey (2008), I and I: The Natural Mystics Marley, Tosh and Wailer (2011), Bageye at the Wheel (2012), and A Smell of Burning (2016). He is an Associate Fellow in the Centre for Caribbean Studies, and teaches creative non-fiction writing, most recently for Arvon and Sierra Nevada College.

Praise for I & I: The Natural Mystics

By the end, the three central characters, the force that they became together and the forces that drove them apart... are more vividly portrayed than in any previous biography. What's more, Grant's clear, concise book, as well as revealing the Wailers in the light of their own culture, helps us to see into the heart of Jamaica itself, through the lives of three of its sons

Grant has pulled off a remarkable feat in the telling of their individual stories... An absorbing read that sheds new light on the famous triumvirate

The main merit of this perceptive work is that, by not making Marley its focus, it gets closer to the truth about him than most other biographers... Colin Grant has composed a highly evocative and original account of a misunderstood group, and the misunderstood man at its core

Provides a lively introduction to the life and times of the Wailers and, incidentally, to the neo-African religions and animist cults of beautiful, bedevilled Jamaica

In Grant's hands life in Trench Town in the 1960's is energetic and theatrical, rich in comedy and tragic irony... Grant's original and stylish second book... This brilliant book is not just about Jamaica, but about ourselves, no longer the country of The King's Speech but a post-imperial nation many of whose citizens have a buried history. Read it also for Grant's acute descriptions of its characters

One of the few books to get to grips with the social, cultural, political and religious forces which drove the trio... He has you smell the open sewers of Trench Town, and feel its deprivation... Joyfully literate and philosophically penetrating

Grant has approached a well worn topic in a lively and different way... Ever alert to Jamaica's adage that "there is no such thing as facts, only versions," he gives space to the ambiguities surrounding the Wailers' story without forcing conclusions, which bestows a rich sense of the mix of truth and fiction constantly at play in Jamaica... The bigger picture is painted in rewardingly colourful, often revelatory detail

The myth-making that surrounds the memory of Bob Marley has largely obscured the contribution of his fellow Wailers, Neville "Bunny" Livingston (later Bunny Wailer) and Peter Tosh. I and I restores these two to their rightful position

Grant...is skilled at peeling away layers of history

There are illuminating details and fresh revelations

This intelligent study...offers something more than the usual story of rags-to-riches and ganja-fuelled Rasta-speak. This book is full of...insights and revelations

The three pillars - Bob Marley, Peter Tosh and Bunny Wailer - occupy equal roles in this illuminating study from the cross-roads of music and society

Vivid biography...This brilliant book is not just about Jamaica, but also about ourselves, no longer the country of The King's Speech but a post-imperial nation, many of whose citizens have a buried history of slavery

Masterful biography...It is utterly riveting, taking in, as it does, true crime, West African folk magic and deeply corrupt politics