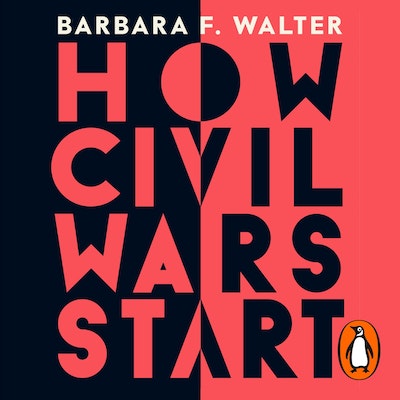 And How to Stop Them

Civil wars are the biggest danger to world peace today - this book shows us why they happen, and how to avoid them.

Most of us don't know it, but we are living in the world's greatest era of civil wars. While violence has declined worldwide, civil wars have increased.

In How Civil Wars Start, acclaimed expert Barbara F. Walter, who has advised on political violence everywhere from the CIA to the U.S. Senate to the United Nations, explains the rise of civil war and the conditions that create it. As democracies across the world backslide and citizens become more polarised, civil wars will become even more widespread and last longer than they have in the past. This urgent and important book shows us a path back toward peace.

Praise for How Civil Wars Start

'A vivid, compelling book on a globally vital issue. Timely, important and original'

Professor Richard English, author of Does Terrorism Work? A History

'When one of the world's leading scholars of civil war tells us that a country is on the brink of violent conflict, we should pay attention. Drawing on her deep understanding of the causes of intra-state violence in places like Myanmar, Northern Ireland, Rwanda, Sri Lanka, Syria, and Yugoslavia, Barbara Walter argues, chillingly, that many of the conditions that commonly precede civil wars are present today in places we would least expect it. This is an important book'

Steven Levitsky and Daniel Ziblatt, authors of How Democracies Die

'How Civil Wars Start is a stop sign for us. What an imperative book for our time. Read and act'

Ibram X. Kendi, author of How to Be an Antiracist

'We have all now witnessed the death of the idea of American Exceptionalism. We are in the same boat as everyone else. What do we do? Barbara Walter shows the way. Polemical and essential'

James A. Robinson, co-author of Why Nations Fail

'Barbara F. Walter has drawn on decades of experience and unparalleled expertise to write a powerful and indispensable book. How Civil Wars Start brilliantly illuminates the history of civil wars and the profound dangers to our union today, serving as both a warning about the stakes in our politics and a call to action for those who want to preserve multiethnic democracy and the values that America is supposed to stand for'

Ben Rhodes, author of After the Fall

'An absorbing guide ... this book performs a valuable service'