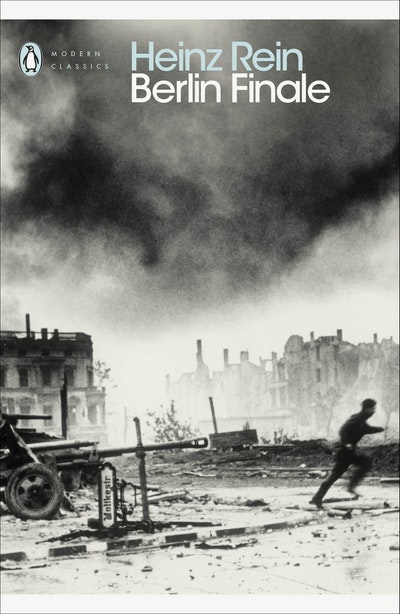 One of the first bestsellers in Germany after the Second World War, Berlin Finale is a breathtaking novel of the most dramatic period of upheaval in modern history

April 1945, the last days of the Nazi regime. While bombs are falling on Berlin, the Gestapo are still searching for traitors, resistance fighters and deserters. People mistrust each other more than ever. Everyone could be a spy.

In the midst of chaos, the young soldier Joachim Lassehn desperately wants to escape. Friedrich Wiegand, a trade unionist tortured in a concentration camp, tries to speed up the end of the war through sabotage. Doctor Walter Böttcher helps refugees to survive. And Oskar Klose's pub is the conspiratorial meeting point of a small resistance group that the SS is trying to trace. Weaving together their stories, Heinz Rein offers an unforgettable portrait of life in a city devastated by war.

Unsettling, raw and cinematic, Berlin Finale was published in Germany in 1947 and quickly became a bestseller. Newly translated eighty years later, it is ripe for rediscovery.

Captivating, moving, unputdownable. . . One of the best Berlin novels, sitting alongside Hans Fallada's Alone in Berlin

A wonderful rediscovery, like a perfectly preserved time capsule, but also a terrific novel by any standards - human, suspenseful, shot through with hard-earned wisdom

An unbelievable rediscovery, much like Hans Fallada's Alone in Berlin. . . Very few books recreate in such a way the nightmarish and intense hell that was the end of the Second World War

Magnificently vivid. . . Art has a habit of resurfacing, when it is worthwhile

An epic work of documentary fiction. . . Its driving narrative and emotional heft keep us rapt. . . compelling and moving

Heinz Rein lived through the final fighting when Hitler, from his bunker, decreed that any German officer ordering a retreat was to be killed on the spot by his own men. Berlin Finale is of interest now chiefly as valuable testimony from one who was there. . . It has the kind of doom-laden splendour of one of John Martin's apocalyptic visions

Spellbinding . . . vividly conveys the devastation wrought on Berlin by Allied bombing raids and the terrible, almost sub-human existence endured by its surviving citizens