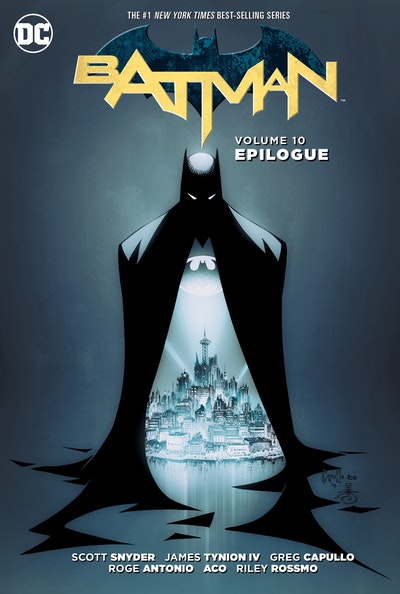 The dust has settled. After a bloody and brutal battle with Mr. Bloom, Bruce Wayne has reclaimed his mantle as the Dark Knight. But with the city broken and his mind slowly mending together, Batman will have to pick up the pieces of his shattered life and reclaim Gotham City as his own. But what will he do when echoes from his past ripple out into his beloved city's future? And how will this set the stage for the next great era of the Dark Knight?

Also featured in this collection: a tale from James Tynion IV about Bruce Wayne's lost days in Gotham!

One of the greatest runs by any creative duo in the history of the industry concludes here! Collects BATMAN #51-52, BATMAN ANNUAL #4 and a special sneak preview of BATMAN: REBIRTH #1 by Snyder and Tom King!

Praise for BATMAN VOL. 7: ENDGAME:  "ENDGAME: their biggest story line in terms of cast and scope during the duo's classic four-year run on the series and one designed to celebrate the character's 75th anniversary."--USA TODAY "ENDGAME, as with all of Snyder's run of Batman so far, is a story that simply should not be missed. Snyder's themes are boldly stated yet again with an intent to add even more to the Batman mythos."--IGN "ENDGAME hits the ground with a dynamic explosion, letting readers know right away that this saga is going to be every bit as dynamic as "Court of Owls," "Death of the Family" or "Zero Year." I'm all in, especially since every single contributor on this book brings their absolute best."--CBR "Scott Snyder and Greg Capullo start their new arc with a bang, as a Batman fights against the biggest, most indomitable foes he's ever seen."--NEWSARAMA