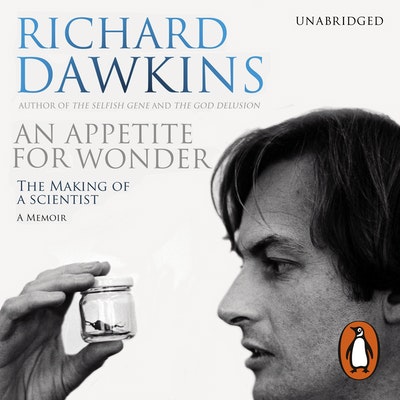 An Appetite For Wonder: The Making of a Scientist

An early memoir from the world's most famous atheist, and scientist.

Born to parents who were enthusiastic naturalists, and linked through his wider family to a clutch of accomplished scientists, Richard Dawkins was bound to have biology in his genes. But what were the influences that shaped his life and intellectual development? And who inspired him to become the pioneering scientist and public thinker now famous (and infamous to some) around the world?

In An Appetite for Wonder we join him on a personal journey back to an enchanting childhood in colonial Africa. There the exotic natural world was his constant companion. Boarding school in England at the age of eight, and, later, public school at Oundle introduce Dawkins, and the reader, to strange rules and eccentric schoolmasters, vividly described with both humorous affection and some reservation. An initial fervent attachment to Church of England religion soon gives way to disaffection and, later, teenage rebellion. Early signs of a preference for music, poetry and reading over practical matters become apparent as he recalls the opportunities that entered his small world.

Oxford, however, is the catalyst to his life. Vigorous debate in the dynamic Zoology Department unleashes his innate intellectual curiosity, and inspirational mentors together with his own creative thinking ignite the spark that results in his radical new vision of Darwinism, The Selfish Gene.

From innocent child to charismatic world-famous scientist, Richard Dawkins paints a colourful, richly textured canvas of his early life. Honest self-reflection and witty anecdotes are interspersed with touching reminiscences of his family and friends, literature, poetry and songs. We are finally able to understand the private influences that shaped the public man who, more than anyone else in his generation, explained our own origins.

Praise for An Appetite For Wonder: The Making of a Scientist

Most geeks cannot write; this one can... Equipped with an undoubted gift for expression, Dawkins the writer comes with a unique pedigree

This eloquent, witty and instructive book reveals the true Richard Dawkins. It's a great read.

Throughout and as usual, Dawkins's writing is graceful, sparkling with anecdotes and wit

Affirmative nostalgia suits [Dawkins], and so does the good humour that imbues his writing about home... The voice is familiar but the tone is new, and the result is some of his most pleasing prose... The clarity and passion with which he recalls his childhood is matched by the clarity, passion, concerns and imagery – fairness, bullying, kindness to animals – with which he expresses the values he has maintained since then... An Appetite for Wonder speaks eloquently about where his values and preoccupations came from... Warmly illuminating about the making of Dawkins the humanist.

Dawkins is a fascinating man and as a writer he is nothing less than essential... he is a man who has influenced or changed the way people think. His story needs to be read.

Enjoyable from start to finish, this exceptionally accessible book will appeal to science lovers, lovers of autobiographies—and, of course, all of Dawkins’s fans, atheists and theists alike.

Richard Dawkins is a hero of mine, so being able to read about how he became the man and the thinker he is, was a particular delight for me. How his life formed from an inchoate, primordial soup and then never wavered from sound, scientific principles made for a huge page turning experience; he’s also a great writer, so that helps. Some people get their kicks from Superman’s origin story, or Batman’s origin story… or Jesus’. But for me, it was Richard Dawkins.

Skepticism and atheism do not arrive from revelation or authority. In our culture it's a slow thoughtful process. But, in the beginning there was Dawkins, moving that process along for many of us, with information and inspiration. For the modern skeptical/atheist movement, in the beginning -- there was Dawkins and he was wicked good. Appetite for Wonder shows us this beginning.

Penn Jillette, author of God No! and Every Day is an Atheist Holiday

It has been my good fortune to meet many of the greatest minds of our time, but standing above them all in the power of both his ideas and his rhetoric is Richard Dawkins, whose books are major publishing events because they change the conversation and the culture. In An Appetite for Wonder Dawkins turns his critical analysis inward to reveal how his mind works and what personal events and cultural forces most shaped his thinking. Destined to become a classic in the annals of science autobiography.

Michael Shermer, Publisher of Skeptic magazine, monthly columnist for Scientific American, and author of The Believing Brain and Why Darwin Matters

Richard Dawkins is among the most eloquent scientists who has ever written for the public. His work has changed countless people’s lives, opening their minds to the wonder and beauty of science, and to the silliness of myth and superstition. But few people know Dawkins the man. How did such a man, born abroad from a family of some privilege, schooled as traditionally as any upper-class British youth, become one of the most well-known scientists in the world, and at the same time—among many of the faithful at least—among the most despised? Told with frankness and eloquence, warmth and humor, this is a fascinating story of a fascinating man who was lucky enough—for himself and the rest of the world—to fall in love with science. This is a truly entertaining and enlightening read and I recommend it to anyone who wants a better understanding of Dawkins the man and the rightful place of science in our modern world.

An Appetite for Wonder feels very much like the substance of the breezy conversation you might have at a long summer dinner, if Dawkins were the guest of honor…charming, boring, brilliant, contradictory, conventional, revolutionary. We leave it perhaps not full of facts or conclusions, but with a feeling of knowing the man.

Dawkins writes with an admirable honestly… When focusing on his area of expertise: explaining the magic contained within the natural universe and the tree of life, Dawkins proves that today he is still an extraordinary thinker, and one who has made an enormous contribution to understanding human nature. This memoir is a fascinating account of one man's attempt to find answers to some of the most difficult questions posed to mankind.

A memoir that is funny and modest, absorbing and playful. Dawkins has written a marvellous love letter to science… and for this, the book will touch scientists and science-loving persons. … an enchanting memoir to read, one that I recommend highly.

Dawkins’ style [is] clear and elegant as usual… a personal introduction to an important thinker and populariser of science. … provide[s] a superb background to the academic and social climate of postwar British research.

The Richard Dawkins that emerges here is a far cry from the strident, abrasive caricature beloved of lazy journalists … There is no score-settling, but a generous appreciation and admiration of the qualities of others, as well as a transparent love of life, literature - and science.

[Here] we have the kindling of Mr. Dawkins’s curiosity, the basis for his unconventionality.

This memoir is destined to be a historical document that will be ceaselessly quoted.

Surprisingly intimate and moving. … He is here to find out what makes us tick: to cut through the nonsense to the real stuff.

This first volume of Dawkins's autobiography … comes to life when describing the competitive collaboration and excitement among the outstanding ethologists and zoologists at Oxford in the Seventies—which stimulated his most famous book, The Selfish Gene.