A Lifetime in the Making

As a child, David Dyer was gripped by a Hollywood movie he saw about the sinking of the Titanic. The story, which left him wide-eyed and mesmerised, kick-started a lifelong fascination that has culminated in the part-thriller, part white-knuckle drama novel The Midnight Watch.

Book after book about the legendary nautical disaster followed the movie, with Dyer acting out the unfolding drama in games that involved turning his bedroom into a ship’s cabin to imitate what it was like to sleep on board a ship (especially when everything began to tilt), and driving his parents mad as he played endlessly with toy ships in water.

At university Dyer embarked on a degree in medicine and surgery, but his Titanic imaginings had left their mark. Life at sea held more allure and he left university to train as a ship’s officer, eventually travelling Australia and the world in a wide range of merchant ships. Some of the most vividly described scenes in The Midnight Watch he owes to his own experiences, standing on a ship’s bridge, on watch, sailing through broiling black seas under a night sky full of stars.

Back on land, Dyer returned to university and completed a degree in Arts and Law. He worked as a litigation lawyer in Sydney and then in London at a legal practice whose parent firm represented the Titanic’s owners back in 1912. By accident he stumbled upon Leslie Reade’s The Ship That Stood Still (1993) and from that moment onwards he became obsessed with the story of Stanley Lord, the Captain of the S.S. Californian, the ship that saw the Titanic’s distress rockets and yet, unfathomably, did nothing.

As a child, Dyer knew of the ‘Californian incident’ and accepted what he had read in a children’s book about the disaster: that the Californian did not respond to the Titanic’s rockets because she thought they were fireworks celebrations for well-to-do passengers. As he grew older, he became less satisfied with this explanation. He thought it would be a great subject for a book.

In 2009 Dyer was awarded a Commonwealth government scholarship to write The Midnight Watch as part of a Doctorate in Create Arts. David’s research took him to New York, Boston, London, and Liverpool.

‘I spent days reading Lord’s papers in the archive of the Merseyside Maritime Museum, the highlight of which was my finding of the original letters of the Californian’s second officer and apprentice, written within days of the disaster, in which they describe the rocket-firing ship they saw,’ said David. ‘Tears came to my eyes as I held these flimsy letters in my white-gloved hands.’

In 2012 David went on the Titanic centenary memorial cruise, travelling on the MS Balmoral from Southampton to the Titanic’s wreck site. ‘A memorable and most moving experience.’

David now teaches English at a secondary school in Sydney and writes part-time. The Midnight Watch is his first novel. 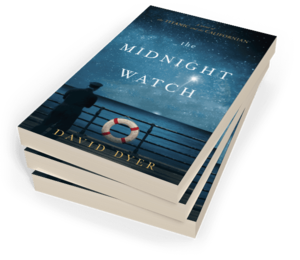 Based on true events, The Midnight Watch is at once a heart-stopping mystery and a deeply knowing novel — frailty of men, the strength of women, the capriciousness of fate and the price of loyalty.