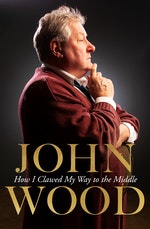 How I Clawed my Way to the Middle John Wood

Be the first to find out about John Wood.