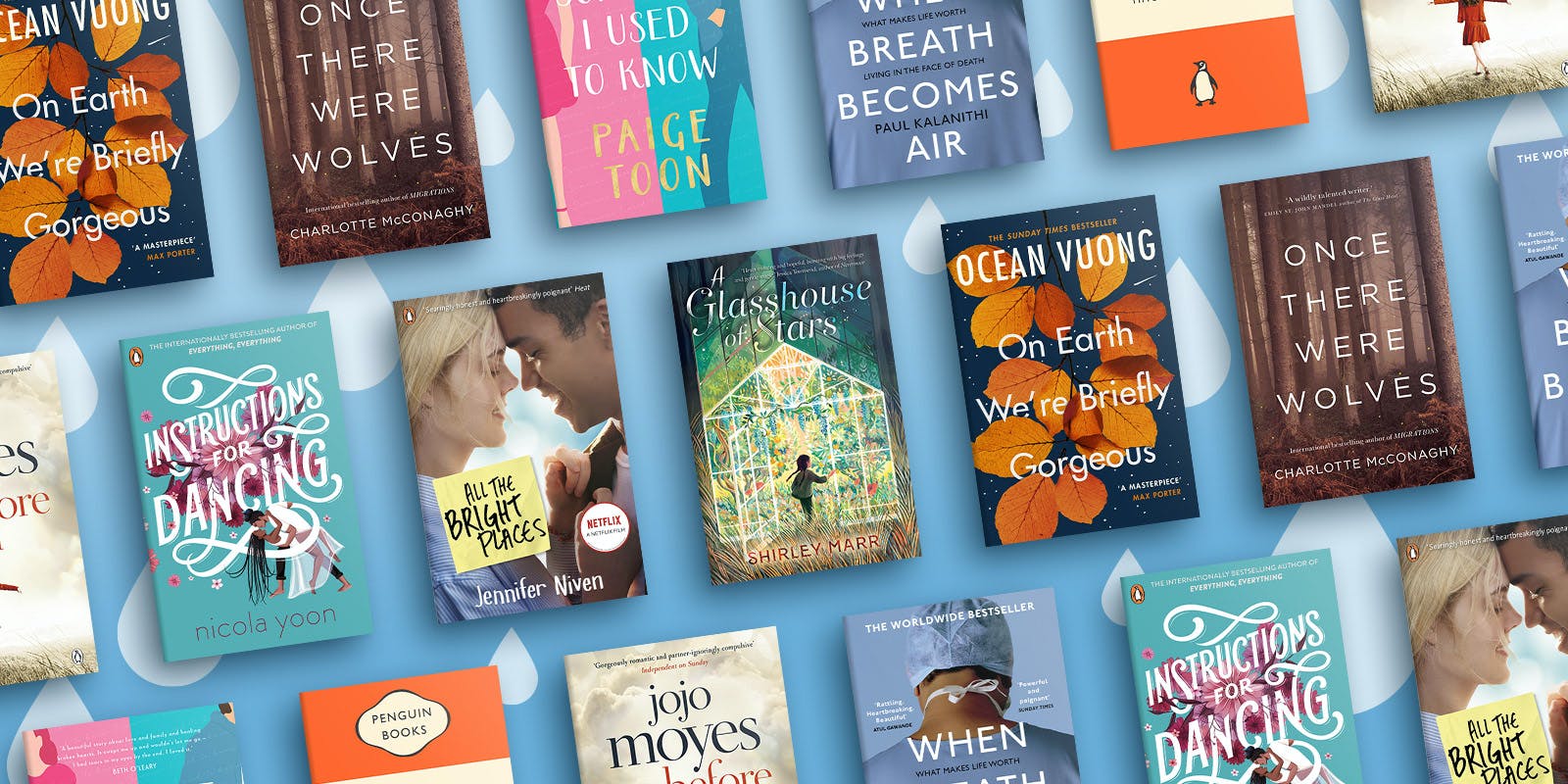 For the days when you need a good cry, whether they’re happy, sad, angry or ugly tears, we’ve got you covered.

So grab the nearest box of tissues because we’ve pulled together some of our favourite go-to titles from the heartwarming to the heartbreaking.

A Glasshouse of Stars by Shirley Marr

Meixing Lim and her family have arrived at the New House in the New Land, where everything is vast and unknown and not in a good way, including the house she has dubbed Big Scary. Embarrassed by the second-hand shoes given to her by the kind neighbours, Meixing has trouble understanding the language at school, fitting in and making new friends. Her solace is a glasshouse in the garden that inexplicably holds the sun and the moon and all the secrets of her memory and imagination. Her fragile universe is rocked when tragedy strikes and Ma Ma refuses to face the world outside. Meixing finds herself trapped within the shrinking walls of Big Scary. Her parents said this would be a better life for them all, but it feels like the worst and most heartbreaking experience of Meixing's entire existence. Surviving will take all the resilience and inner belief of this brave girl to turn their world around. An exquisite, heartbreakingly beautiful gem.

Instructions for Dancing by Nicola Yoon

Evie is disillusioned about love ever since her dad left her mum for another woman — she's even throwing out her beloved romance novel collection. When she's given a copy of a book called Instructions for Dancing, and follows a note inside to a dilapidated dance studio, she discovers she has a strange and unwelcome gift. When a couple kisses in front of her, she can see their whole relationship play out — from the moment they first catch each other's eye to the last bitter moments of their break-up. For Evie, it confirms everything she thinks she knows about love — that it doesn't last. But at the dance studio she meets X — tall, dreadlocked, fascinating — and they start to learn to dance, together. Can X help break the spell that Evie is under? Can he change Evie's mind about love?

All the Bright Places by Jennifer Niven

Theodore Finch is fascinated by death, and he constantly thinks of ways he might kill himself. But each time, something good, no matter how small, stops him. Violet Markey lives for the future, counting the days until graduation, when she can escape her Indiana town and her aching grief in the wake of her sister's recent death. When Finch and Violet meet on the ledge of the bell tower at school, it's unclear who saves whom. And when they pair up on a project to discover the 'natural wonders' of their state, both Finch and Violet make more important discoveries: It's only with Violet that Finch can be himself — a  weird, funny, live-out-loud guy who's not such a freak after all. And it's only with Finch that Violet can forget to count away the days and start living them. But as Violet's world grows, Finch's begins to shrink. How far will Violet go to save the boy she has come to love?

Someone I Used to Know by Paige Toon

At 15, George is the foster brother Leah never asked for. As the angry, troubled boy struggles to come to terms with his circumstances, Leah finds herself getting drawn closer to him. Theo’s wealthy family have mysteriously pulled him out of boarding school and he’s now enrolled at the local state school with Leah and George. When their worlds collide that summer, the three teenagers form a bond they believe will be unbreakable. But life doesn’t always go to plan...
Years later, shocking news brings Leah back to Yorkshire, baby daughter in tow. But Emilie’s father Theo isn’t with them, and George has unexpectedly returned. After half a lifetime, have they healed the scars of their pasts? Will coming back home set their hearts in a different direction? So much can change in half a lifetime...

Holding the Man by Timothy Conigrave

In the mid-seventies, at an all-boys Catholic school in Melbourne, Timothy Conigrave falls wildly and sweetly in love with the captain of the football team. So begins a relationship that weathers disapproval, separation and ultimately death. With honesty and insight, Holding the Man explores the highs and lows of any partnership, and the strength of heart both men have to find when they test positive to HIV. This is a book as refreshing and uplifting as it is moving; a funny, sad and celebratory account of growing up gay.

Me Before You by Jojo Moyes

Lou Clark knows lots of things. She knows how many footsteps there are between the bus stop and home. She knows she likes working in The Buttered Bun tea shop and she knows she might not love her boyfriend Patrick. Will Traynor knows his motorcycle accident took away his desire to live. He knows everything feels very small and rather joyless now and he knows exactly how he's going to put a stop to that. What Will doesn't know is that Lou is about to burst into his world in a riot of colour and neither of them knows they're going to change the other for all time. The heartbreaking novel from Jojo Moyes that proves you're never too old or too young to cry.

Inti Flynn arrives in Scotland with her twin sister, Aggie, to lead a team tasked with reintroducing 14 grey wolves into the remote Highlands. She hopes to heal not only the dying landscape, but a broken Aggie, too. However, Inti is not the woman she once was, and may need rewilding herself. Despite fierce opposition from the locals, Inti’s wolves surprise everyone by thriving, and she begins to let her guard down, even opening up to the possibility of love. But when a local farmer is found dead, Inti knows where the town will lay blame. Unable to accept her wolves could be responsible, she makes a reckless decision to protect them, testing every instinct she has. But if her wolves didn’t make the kill, then who did? And what will she do when the man she’s been seeing becomes the main suspect? This profoundly affecting novel will stay with you forever.

At the age of 36, on the verge of completing a decade's training as a neurosurgeon, Paul Kalanithi was diagnosed with inoperable lung cancer. One day he was a doctor treating the dying, the next he was a patient struggling to live. When Breath Becomes Air chronicles Kalanithi's transformation from a medical student asking what makes a virtuous and meaningful life into a neurosurgeon working in the core of human identity —the brain — and finally into a patient and a new father. What makes life worth living in the face of death? What do you do when life is catastrophically interrupted? What does it mean to have a child as your own life fades away? Paul Kalanithi died while working on this profoundly moving book, yet his words live on as a guide to us all. When Breath Becomes Air is a life-affirming reflection on facing our mortality and on the relationship between doctor and patient, from a gifted writer who became both.

This is a letter from a son to a mother who cannot read. Written when the speaker, Little Dog, is in his late twenties, the letter unearths a family's history that began before he was born. It tells of Vietnam, of the lasting impact of war, and of his family's struggle to forge a new future. And it serves as a doorway into parts of Little Dog's life his mother has never known — episodes of bewilderment, fear and passion — all the while moving closer to an unforgettable revelation.