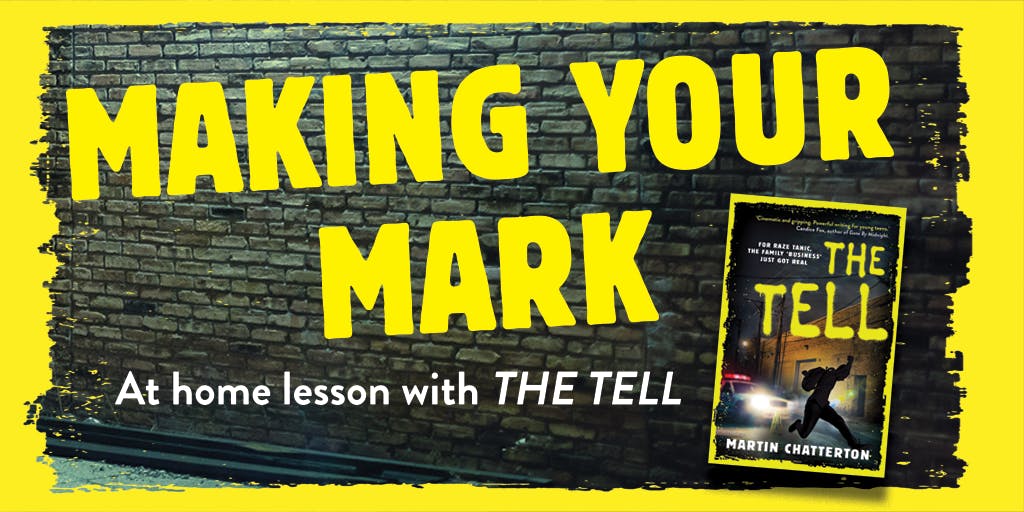 Online learning: Making Your Mark with The Tell

Humans have felt the need to describe the world around them since the very beginning of our existence.

In this visual arts and research task we take a look at why that might be and trace the development of human mark making with particular emphasis on ‘closing the circle’ between humanity’s earliest cave art and contemporary street art filtered through some of the themes in Martin Chatterton’s novel, The Tell.

For teachers and parents: Students will watch the explanatory film, Making Your Mark, in which Martin outlines the underlying theme behind the interest Raze Tanic, The Tell’s main protagonist, has in street art and graffiti.

The film provides an introductory exploration into the creative drive and emotional pain that compels a person to 'make their mark'. Following this, students will work on their own creative piece which will, like most pieces of street art, blend text and image to reflect one of the themes found in The Tell.

In this project, students will develop their research abilities alongside their visual arts skills in an exercise which successfully combines text and image. This activity is suitable for independent learning for Years 6–9 and can be as short as 1–1.5 hours or be extended for as much as a week.

For students: The Tell is a fast-paced, explosive ‘coming-of-age’ thriller with the hugely conflicted fourteen-year-old Raze Tanic right at the centre. Although the main emphasis of the story is Raze’s dilemma (about finding the courage not to follow his father and brother into the family crime ‘business'), the ‘backstory’ of The Tell is the world of street art which Raze is involved with. This exercise focuses on that aspect of the book and the end result will be an alternate way of looking more closely at Raze’s dilemma. By the end of this project, you’ll know more about the artist you’ve chosen to research and will have applied that knowledge in a creative response.

As an introduction to The Tell, please watch this trailer and answer the following questions:

1. In what city does The Tell take place?

2. The trailer tells us that Raze Tanic's dad 'lives' at the Deep Cut Correctional Centre. What do you think that means?

3. In the trailer, we're told that Deep Cut Correctional Centre was built 'to keep the wolves away from the sheep'. Who are the wolves and who are the sheep?

4. Why do the graffiti artists shown in the trailer hide their faces?

Watch the next video, Making Your Mark in which Martin Chatterton, author of The Tell explains why he thinks Raze Tanic enjoys street art so much. When you're finished watching, answer the questions.

2. There are a number of artists mentioned in the clip. One of them, Pablo Picasso, is shown along with his artwork Guernica (1937). Why is Guernica thought of an an 'important' painting and what event does it commemorate?

3. The Australian artist, John Olsen, painted a famous mural called Salute to Five Bells. Who wrote the poem that inspired that painting and where is that mural to be found? Salute to Five Bells was also inspired by one of Olsen's earlier murals called simply Five Bells. Olsen says he painted Five Bells because he "wanted to show (Sydney) Harbour as a movement, a sea suck, and the sound of the water as though I am part of the sea." What do you think he means by wanting to be 'part of the sea'?

4. In Making Your Mark, Martin talks about 'palaces dedicated to human art'. What famous French art gallery is shown?

5. Why do you think humans are making more 'marks on walls' now than we have ever done before? Where does the word graffiti come from?

6. The UK artist Banksy keeps his identity secret. Can you think of any reasons why he would do that?

This clip contains the first chapter of The Tell. Please watch and then begin the exercise outlined below. Alternatively you could also read an extract of chapters one and two.

Now you've seen trailers for The Tell, read (or heard) the first chapter and watched Martin explain why he thinks humans 'make marks', you will 'make your own mark'. In The Tell, Raze and his friends (Candy and Ids) always prepare the street art piece they are going to do in advance, using drawing and paintings and ideas they put down in sketchbooks and mood boards.

A mood board is frequently used by creative artists of all kinds to use as a reference point for something they are about to create. A mood board is usually visual but can, and often does, contain text or video (in which case the ‘board’ will be a word used for a ‘mood collection’).

A good mood board helps the artist keep on track and develop strands of their thoughts before committing to a finished product. In this exercise, choose one of the artists mentioned in Making Your Mark and build a ‘mood board’ of their work.

Using the mood board as your reference, create a piece of ‘street art’ in the style of one of the artists in Making Your Mark. The piece you make should also reflect one of the central themes found in The Tell: tough choices, family pressures, society pressures, ‘growing up’ and so forth.

Your piece can be any size and can contain any ratio of words and image so long as it does contain both words and image. It can be ‘mostly image’ or ‘mostly word’. The end result should be something that could eventually be painted or projected onto a wall or outdoor surface. If you do decide to paint/project/draw your piece on a real-life outside wall, make sure you have permission first!

Action, crime and intense family drama combine to create a powerful story in the vein of Two Wolves or a young Boy Swallows Universe.

How to Do Hard Things activity pack

Take some time for your mental health and wellness with this free activity pack.

Colour in Snickers, Bluey and Winton!

Colouring in with Alfie the Brave!

365 Things to do with LEGO Bricks activity pack

Design a LEGO dream home with this fun activity pack!

Organise your desk with a LEGO stationary holder!

Find out how you can protect the ocean and its creatures in this fun activity pack!