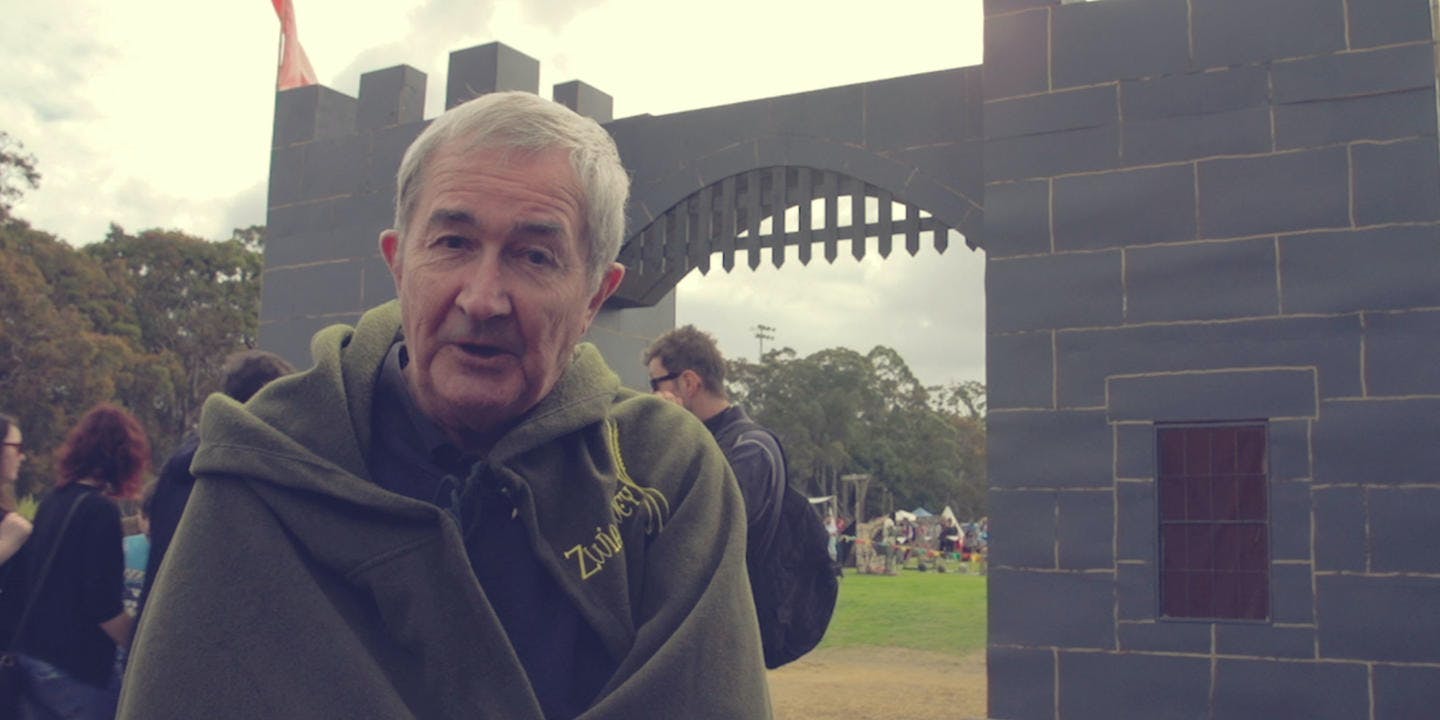 How did you think of the Ranger’s Apprentice series?
When my son Michael was about twelve years old, he wasn’t interested in reading. So I wrote a series of short stories about a character named Will. Will was actually Michael. I thought that would get him interested in the stories and I was right. I wrote twenty of these stories over a five-month period, then I put them away for about fifteen years. It was my daughter Katy who suggested I should turn them into a book. A book? There are now twelve books in the Ranger’s Apprentice series, and three in the Brotherband series.

How does it feel knowing that you’ve helped many more children with reading, not just your son?
Humbling is the first word that springs to mind. It’s something I never expected. I set out merely to entertain and divert readers. To know that I’ve helped some of them (and, it seems, quite a large number of them) to learn to enjoy reading makes me feel that I’ve actually done something very worthwhile. I have actually changed people’s lives – through the medium of my stories and my characters. I love that fact. I am so very, very proud of it.

How many kids did you think would read your books when you first started writing?
I had no idea. I just hoped somebody would. I am stunned by the way things have turned out – and also delighted.

Was it ever hard to keep writing a certain book? Did you ever get stuck and, if so, how did you get unstuck?
No. So far I’ve never been stuck. (Touch wood.) Probably that’s because I plan each story completely before I start writing the book. I plan the overall story, then write out a chapter by chapter plan, listing the major events in each chapter. I keep that chapter breakdown by me as I write. I write a chapter each day, working Monday to Friday. That way, I always know what I’m going to write next.

How do you think of new stories?
Sometimes I’ll think of a location I want to take my characters to. Books 8 and 9 started this way. I had been to Ireland and I thought, ‘This would be a good location’. From there, I got the idea of a con man running a false cult religion. Book 10 started this way too. I wanted to set a story in a country like Japan, which is where my son Michael lives now. At other times, I’ll have an idea like, ‘What if a half Skandian/Araluan boy invented a new, more efficient kind of sail for a ship?’ From there, the rest of the Brotherband story grew, involving the Skandian training system for teenage boys (the brotherband system) and an evil pirate who stole a precious artifact. As you get more and more into planning the story and putting in new ideas, it’s sometimes hard to remember how you got started in the first place.

Who is the character of Halt based on, and how has your understanding of the characters changed over time?
Halt, I realised several years ago, is based on my sixth-grade teacher. That realisation came as quite a surprise to me. I never knew it at the time I began writing the books and allowing the characters to grow and develop in my mind. I always thought he was solely a product of my imagination. Then I realised how much one’s subconscious is involved in all aspects of writing stories like these.

Characters often tend to be based on people you know. Apart from Halt being my sixth-grade teacher and Will being my son Michael, Horace was based on Mike’s best friend, Jeremy, and Evanlyn is a little bit like my daughter Katy. The trick is to change them around a bit, give them some conflicting qualities to make them real. All-knowing, infallible Halt, for instance, suffers from seasickness. It makes him a little more human.

As to my understanding of the characters, they’ve grown to feel like real people to me. I know them all so well that now I tend to know how they will react to a given circumstance and, as many other authors have said before me, you can’t have them reacting out of character. They won’t let you.

How do you keep track of the battles while changing perspective?
I do a lot of sketching and mapping of the battle field so I know where everyone is and where everyone is going. I keep that map beside me while I’m writing. Also, mapping it out lets me see if there’s anything I’ve overlooked - a way for the enemy to outflank my heroes, for example. The good thing about an imaginary battle is, if there’s a way for this to happen, you can always create a river or chasm or mountain to block that loophole.

What’s been your biggest adventure?
Many years ago, I resigned my job, sold my car and bought a ticket on a ship to England. I’d had no prior inclination at all to leave the country. I had no job lined up in England. I had no work permit and not a lot of money. When I got there, it took me three months to find a job. But I was following a young lady I’d fallen in love with. I followed her across the world and we were married about two weeks after I arrived in London.

Rangers are motivated by a sense of duty and service to each other, king and country – what motivates you to continue to write the series?
I love the characters. As I said earlier, they’re very real to me. I have loved seeing them grow and develop and form relationships. And I love being a story teller. There’s nothing better than creating your own world, your own events, your own people. It’s the best fun in the world. I live in fear that someone will find out what a good time I’m having and they’ll stop me. (Just kidding.)

Where were you born and where did you grow up?
I was born in Waverley and I grew up in Clovelly, both suburbs of Sydney, Australia. We lived about a mile from the beach.

Did you have any siblings?
Yes. I had two sisters and a brother, all older than I am. One of my sisters passed away about two years ago. The other sister, the oldest in the family, was a writer. She was a newspaper and magazine columnist and also wrote children’s books.

What was your childhood like?
It was very enjoyable. My brother was four years older than I but we played a lot together as we were growing up. We spent a lot of time at the beach, staying there for hours in the school holidays. Kids had more freedom then, and things were safer too, so we’d just wander off with our towels and return hours later.

My father died when I was quite young but we had a wonderful extended family living across the road. My nana was a wonderful woman - mad as a hatter, with a thick Irish accent that she never lost. My sister said about her: ‘Nana was always on your side, no matter what. If you were found next to a dead body with a smoking gun in your hand, she would insist somebody else shot him.’ My mother was a wonderful woman who made sure we never felt disadvantaged. She was also a great storyteller and writer.

As my brother grew older and discovered girls, I played by myself a lot, and I made up adventures and acted them out. I’d get a little embarrassed if anyone caught me talking to myself. Actually, I was talking to my imaginary characters.

My best ‘toy’ as a child was a big packing crate. I could fit inside it and it had a sliding lid. It became, in turn, a plane, a submarine, a really fast car, a fort and anything else I wanted. Do you sense an imagination at work and being developed here?

How many children and grandchildren do you have?
I have three children: Katy (also known as Kitty), Penny and Michael. I have four grandsons: Penny has three and Michael has one. They get on brilliantly together.

Do your grandchildren like reading your books?
They’re still a little young but one of them has started reading the series.

Did you write or tell stories as a child? What did you want to be when you grew up?
Yes indeed. My earliest memory of writing stories was when I was in fifth grade and I used to write adventure stories when we had writing assignments in English class.

I always wanted to be a writer, but I didn’t think it was possible to earn a living as an author, so I initially worked in advertising as a copywriter.

Who were your favourite writers when you were growing up?
C.S. Forester; Captain W.E. Johns; Mary Grant Bruce; Ivan Southall.