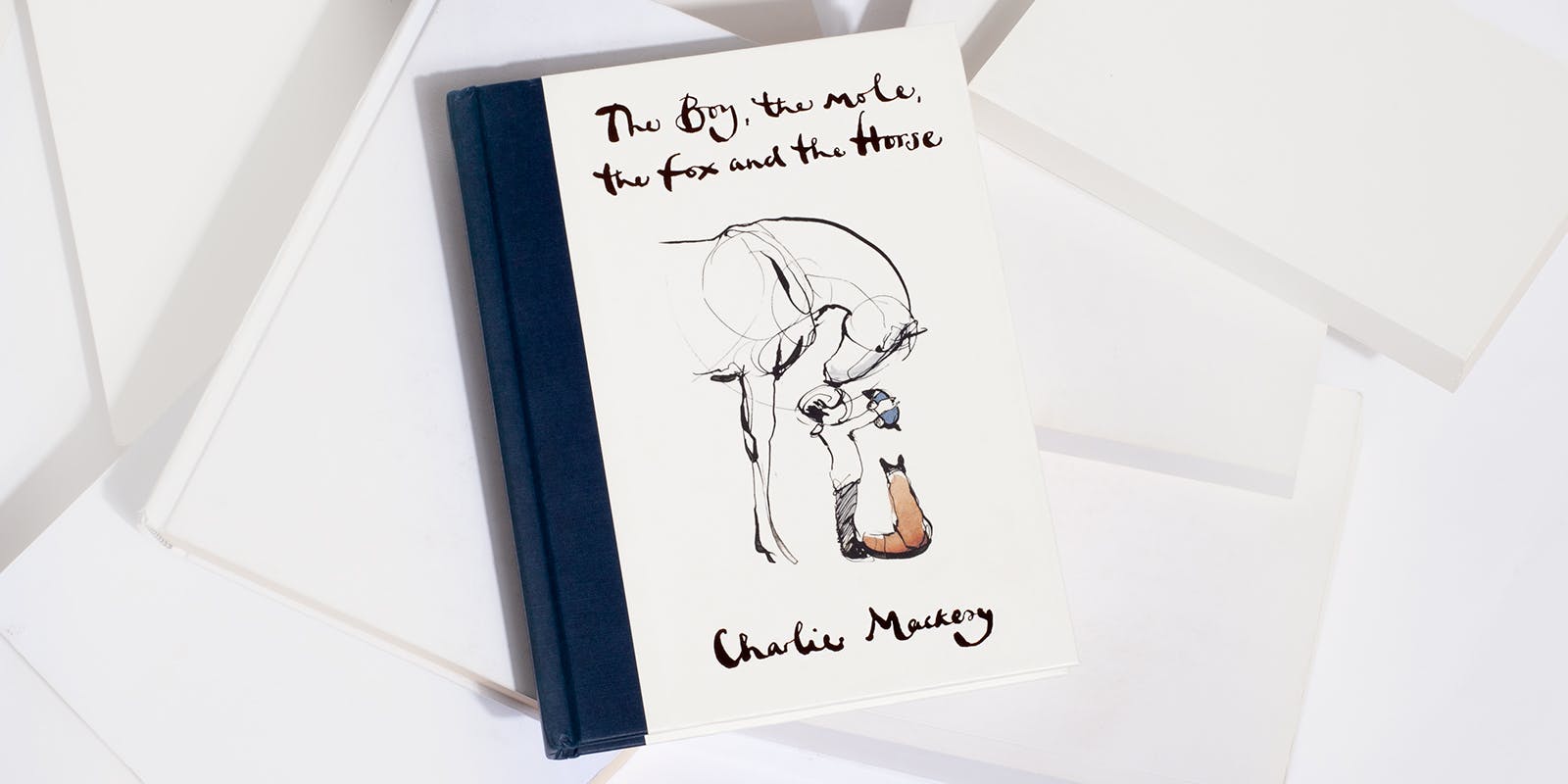 The artist on his inspiration for The Boy, The Mole, The Fox and The Horse​.

How did you get started in art?
I have always drawn, I drew horses when I was six. It has always been there, it was never a career option, and it’s never on the smorgasbord of choice at school is it? Either you’re going to be a lawyer, or a doctor, or a teacher, but you’re never going to be an artist. I still don’t think I’m artist, I still think every day I’ll have to do a proper job tomorrow. But I got started when my best friend Jamie was killed when I was 18, and I just decided to start drawing because it helped me. Like Forrest Gump, I didn’t stop. So it’s quite a strange way to start, I suppose.

Did you go to art school or take art lessons?
No, I did go to America. I really wanted to be a sculptor, so I went to study anatomy, strangely, in America in the early 1990s. I mainly learned about how to deal with bed bugs, I didn’t learn that much. They gave me a barn to sleep in that was riddled with bed bugs. It was in the middle of nowhere. So no I didn’t really study. I tried to go to Art College once and I left after a week. I don’t know why I just didn’t really feel that connected to what they were doing. I had a strange feeling that if I stayed there I’d give up making art. I didn’t want whatever I had to be crushed.

When did you start doing the Boy, the Horse, the Fox, and the Mole drawings? What inspired you to do those drawings?
Probably exactly two years ago. I have illustrated a lot of books, and I’d just finished illustrating a book and I’d gone back into that mode of ink and watercolour again, after making sculptures and big surly rough things. So I thought, I’ll just give this a whirl, and slowly they emerged as I was drawing. Then a vague narrative happened around them, and I was processing a lot of questions at the time about life and existence and I decided to put those thoughts into conversation. They were generally questions that we don’t necessarily talk about. What’s the point of life? Why are we here? What do you think success is? All those things. I thought if I got run over tomorrow what I would like to say? So I made the book.

Which was your very first illustration in this body of work and what inspired you to make that very first piece, with words?
The first drawing was ‘Kind’. I was with lovely Bear Grylls, one of my oldest friends, we were mucking around in a tree and his son was on a precariously thin branch and he was chatting to us, sitting on the branch. I thought it was a great place to do a drawing, of someone sitting on a branch, asking questions, so I drew him. So that’s where the subject came from. Then with the words, we were asking him what he wanted to be when he grew up, and I was thinking about the idea of kindness, so I just wrote ‘Kind’. That was probably the first conversation they had.

What parts of you, and all of us, does each animal represent?
The boy just represents the bit of me that wants to know why we’re alive and what we’re meant to be doing and doesn’t really know much. The mole is me, always hungry, thinks I’m clever but I’m not, thinks I’m wise but I’m not, always wants to eat stuff. The fox is like I suppose we all are, hurt in some way, it’s the bit of me that’s quite withdrawn, fearful of trusting. The horse is the bit of me, which everyone has, which is the slightly wiser, spiritual side of us, but also vulnerable. So they all represent different parts of us, or me.

Do animals have a special place in your heart and why?
Hugely so, you can trust them, you can really deeply love an animal and yet they’ve never said a word to you, which says a lot for silence. There’s a purity to animals that human beings seem to have lost, they haven’t wrecked the planet for instance. We have so much to learn from them. I think being brought up on a farm I spent a lot of time with dogs and sheep and horses and cats and rabbits and you name it, wildlife. I spent huge amounts of time in the evenings not watching television but sitting on the hillside just staring, every night I’d walk for miles, I remember, across the Northumbrian hillside, just sitting and watching badgers walk across the field or watching foxes chase rabbits. All of it fascinated me, and it fascinated me a bit more than people did if I’m honest, that whole world, it was a world you could enter and be part of.

Why do you believe your work is so popular? What about it do you feel resonates with people?
Maybe it helps people remember what it’s like to be a child. Maybe the world is complicated and quite frightening and there is a simplicity to it perhaps, and some people can take comfort from it. Politically and environmentally we are in a very precarious place and fear and uncertainty are louder than they have been in a long time. I genuinely don’t know. I think that’s a question for other people to answer.

Are you trying to tell the readers something about love?
Maybe that love is just as important and just as successful, even more successful, than any other kind of success. We live in a world which is obsessed with achieving things and often if you list people’s achievements it’s very rare that someone says I’ve kept good friendships and I’ve been faithful, it’s more I earned a million dollars and I bought a big house and I won some gold cup in some race. To me that’s fine, but the greater achievement is to love and be kind. It’s so rarely seen as success, but I think it is.

What is the biggest challenge in your career?
Loneliness. The life of an artist and making art, you do mainly alone. Most people I know who are artists, a lot of them gave up. Not because they couldn’t make money just solely because it was too isolating and so for me isolation has been the hardest thing. Which is why doing this book has been such a revelation, because I’ve done it not only on social media with lots of people’s engagement but also working with Penguin, which has been a lovely thing. So definitely loneliness, also you have to really believe what you are doing is good enough to persevere with and there are times when it’s really tough to keep going. Because ultimately making art is quite a childlike thing; some people have proper jobs. People used to say to me 'when are you going to get a proper job? When are you going to be a lawyer, or a doctor, or a teacher? When are you actually going to do something rather than do what children do?' So that’s definitely been hard, but the toughest thing is the loneliness.

What has been your biggest success?
My friends. Everything to do with learning how to love friends and be there for people and have them be there for you. In the book there’s a question, what do you think success is? And the answer is to love and I really believe that. I suppose more directly with the book, the greatest success has been reading the responses from people about how some of the drawings have made them feel. Not least a few who have chosen against taking their own lives because of a drawing or two and that fills me with a sense of relief and purpose and profound privilege that you can make a few marks on a piece of paper that helps people stay alive I suppose. That is pretty moving to me.

Who is your favorite artist?
My favourite artist is probably one who influenced me most when I was little, an author and illustrator called Edward Ardizzone, who wrote books like Tim All Alone, and Tim at Sea. They are very emotive, hand-drawn, beautifully written stories about a boy called Tim. When a book gets under your skin when you’re little it stays there, it just goes under your ribs, into your heart, and it stays. There was also a film called The Black Stallion which I watched repeatedly when I was younger, over and over again about a boy and a horse who are shipwrecked on an island and how they survive the island, and a lot of the drawings have come from the inspiration of the boy and the horse on the island when they are alone, and the affection they had for each other when they were just playing. There was a scene in the film where they just charge up and down the beach, just for the sheer joy of it. It stayed with me. One of the pages of the book is doing nothing with friends is never doing nothing, is it? So that’s where all that comes from.

Any words of wisdom for other artists?
Persevere, always. I did a drawing where the boy says to the mole ‘how do you make a good mole hill’ and the mole says ‘by making a lot of bad ones first’. I think we are very hard on ourselves. I know with me I tend to give up quite quickly on things. But if you just accept your mess, accept your mistakes and know that every mistake you make is a journey to not making a mistake the next time. So for other artists I’d say don’t give up, look at other artists, go to museums, whoever really moves you, study them.

Will we be hearing more from the Boy, the Mole, the Fox and the Horse?
I think the four will stay as a four but they’ll meet other characters, like a Penguin or a Polar Bear. Hopefully I’ll do another book. I think that they might meet a lady who denies them cake and they’ll make friends with her, I think that’s what’s going to happen.

The Boy, The Mole, The Fox and The Horse Charlie Mackesy

A reminder of what truly matters, as told through the adventures of four beloved friends. Based on Charlie's daily Instagram. For fans of Winnie-the-pooh's Little Book of Wisdom.