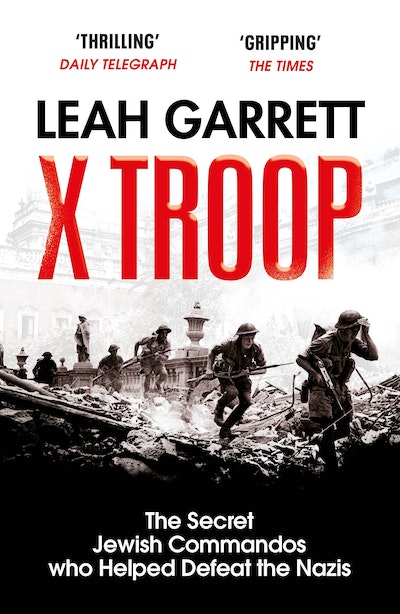 The Secret Jewish Commandos Who Helped Defeat the Nazis

This is popular WW2 history at its heart-stopping best, fuelled by an incredible, previously untold story of the Jewish refugees who fought in Britain's most secretive special-forces unit

'Gripping... Garrett's chief strength is her ability to relight the lamps of the past so that they glow anew' The Times'Extraordinary' Jewish Chronicle
THE THRILLING TRUE STORY OF THE SECRET JEWISH COMMANDOS WHO HELPED DEFEAT THE NAZIS DURING WW2

June 1942. The shadow of the Third Reich has fallen across the entire European continent. In desperation, Winston Churchill and his chief of staff form an unusual plan: a new commando unit made up of Jewish refugees from Germany and Austria who escaped to Britain just before the War. Many have lost their families, their homes - their whole worlds. And now, in the crucial final battles against the Nazis, they will stop at nothing to defeat them. Trained in counterintelligence and advanced combat, this top secret unit becomes known as X Troop. Some simply call them a suicide squad.

Drawing on extensive original research, including interviews with the last surviving members, Leah Garrett follows this unique band of brothers from Europe to England and back again, with stops at British internment camps, the beaches of Normandy, the battlefields of Italy and Holland, and the hellscape of Terezin concentration camp - the scene of one of the most dramatic, untold rescues of the war. For the first time, X Troop tells the astonishing story of these secret shock troops and their devastating blows against the Nazis.

Leah Garrett, who directs the Jewish Studies Program at Hunter College and is an Honorary Professor of History at Warwick University, has discovered a trove of materials, including diaries, letters, and pieces of memoirs crafted by X Troopers. She has also interviewed a number of their family members. Most of the men kept the English names they were given as cover, and lived out their lives in the UK after the war.

Garrett recounts in this dramatic and deeply researched history the WWII exploits of X Troop, a British commando unit made up of Jewish refugees from Austria, Germany, and Hungary . . . Garrett folds vivid profiles of Lord Mountbatten, Lord Lovat, and other prominent military figures into the story, and skilfully draws from war diaries and interviews with surviving X Troopers. This scrupulous history shines a well-deserved spotlight on its heroic subjects

This is Inglorious Basterds-but much better. Because it is the real story of clandestine Jewish fighters wreaking havoc against the Nazi war machine

Part history and part mystery, X-Troop: The Secret Jewish Commandos of World War II tells a compelling and little known story about an improbable group of "British" soldiers who made an important contribution to the war effort. Their transformation from interned "enemy aliens" to soldiers with high security clearances is fascinating

Garrett's detective work is stunning, and her story-telling is masterful. This is an original account of Jewish rescue, resistance and revenge from within the Reich and at its edges, starting with the boys flight to England and ending with their brave return as they spearheaded the Allied invasion at Normandy, fought to defeat the Reich, and remained in British service to denazify Germany and Austria

A masterful work. Combining the skill of a superb storyteller and the precision of a first-rate scholar, Leah Garrett's new book tells a tale - truly stranger than fiction - of Jewish youth dispatched to the safety of England by their beleaguered German-Jewish families who volunteered for some of the most perilous of all anti-Nazi missions. An extraordinary portrait of heroism, of human decency amid horror.

Steven J. Zipperstein, author of Pogrom: Kishinev and the Tilt of History

This is the best kind of history: highly original, deeply researched, beautifully written, with more than a touch of personal pathos. The men of X Troop went from stateless refugees of Nazi oppression to highly trained British special operations soldiers whose courageous actions did much to hasten Hitler's demise. Kudos to Leah Garrett for telling their amazing story with the authority of a scholar and the immediacy of a novelist!

X Troop reads like a page-turning thriller. Cinematic in their scope and rich description, these are the heretofore unknown stories of young European Jewish emigres clawing their way out of Nazi-occupied Europe and finding refuge in the UK, only to be interned as enemy aliens in horrific camps in Canada and Australia, before being recruited by Churchill and Lord Mountbatten for their brains, brawn, languages, and anti-Nazi zeal. In Garrett's brilliant telling, based on original interviews and deep-dive archival research, their return to the continent as elite Allied super-commandos is both heart-stopping and heart-breaking

James Young, Founding Director Institute for Holocaust, Genocide and Memory Studies and author of The Stages of Memory

This dramatic, previously untold story of extraordinary covert valor and victory takes readers all across the European front, culminating in the shock of the Terezin concentration camp. This tale of profoundly motivated and capable men of action on a noble mission, each profiled in condensed biographies, is a rousing and redefining portrait of an, until now, overlooked group of dedicated warriors who played an outsized role in defeating the Third Reich. Garrett has added a crucial chapter to the always relevant and ever-deepening history of WWII and the Holocaust

A compelling read . . . Garrett's evocation of the tension and drama of the many clandestine operations in Europe undertaken by X-Troopers is gripping

Thrilling . . . X Troop stands as a fitting testament to a unique band of brothers

Based on declassified military records, wartime diaries, and interviews with commandos and their families, X Troop vividly charts the special unit's missions, from storming Pegasus Bridge on D-Day to successfully liberating a trooper's parents' from the Theresienstadt concentration camp to capturing escaped Nazis after the war

The page-turning account is replete with heretofore unknown astounding feats thanks to the author's success in declassifying long-sealed, top-secret British military records . . . Garrett's excellent new book corrects the record by fully recounting the X Troopers' exploits and accurately reflecting who they were

Renee Ghert-Zand, The Times of Israel

X Troop is the fiercest British Second World War commando unit you have likely never heard of... The page-turning account is replete with astounding feats that were unknown until now, thanks to the author's success in declassifying long-sealed, top-secret British military records... [Garrett's] experience researching and writing vividly about combat shines through in X Troop

Gripping... Garrett's chief strength is her ability to relight the lamps of the past so that they glow anew

Vivid and starkly unsentimental... X Troop is a gripping story of Jewish courage and empowerment in the midst of darkness and sorrow

Gripping... Garrett's chief strength is her ability to relight the lamps of the past so that they glow anew

This dramatic, previously untold story of extraordinary covert valour and victory takes readers all across the European front... A rousing and redefining portrait of an, until now, overlooked group of dedicated warriors

A compelling read... Garrett's evocation of the tension and drama of the many clandestine operations in Europe undertaken by X-Troopers is gripping