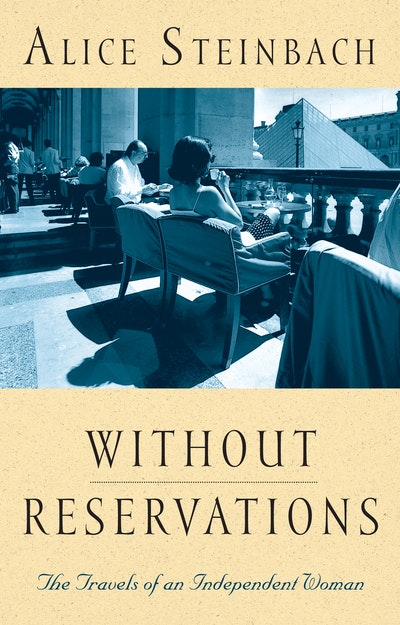 The Travels Of An Independent Woman

Without Reservations is about a woman's dream come true – taking a year off to travel the world and rediscover what it is like to be an independent woman, without ties and without reservations.

Without Reservations is about a woman's dream come true – taking a year off to travel the world and rediscover what it is like to be an independent woman, without ties and without reservations.

'In many ways, I was an independent woman,' writes Alice Steinbach, single working mother and Pulitzer prize-winning journalist. 'For years I'd made my own choices, paid my own bills, shovelled my own snow, and had relationships that allowed for a lot of freedom on both sides.' Slowly, however, she saw that she had become quite dependent in another way. 'I had fallen into the habit – of defining myself in terms of who I was to other people and what they expected of me.'

Who am I, she wanted to know, away from the things that define me - my family, children, job, friends? Steinbach searches for the answer in some of the most exciting places in the world: Paris, where she finds a soulmate in a Japanese man; Oxford, where she learns more from a ballroom dancing lesson than any of her studies; Milan, where she befriends a young woman about to be married.

Beautifully illustrated with postcards Steinbach wrote home to herself, Without Reservations is an unforgettable voyage of discovery.

Alice Steinbach, whose work at the Baltimore Sun was awarded a Pulitzer Prize for Feature Writing, has been a freelance writer since 1999. She has taught journalism and writing at Princeton University, Washington and Lee University, and Loyola College. She lives in Baltimore. She is author of WITHOUT RESERVATIONS and EDUCATING ALICE.