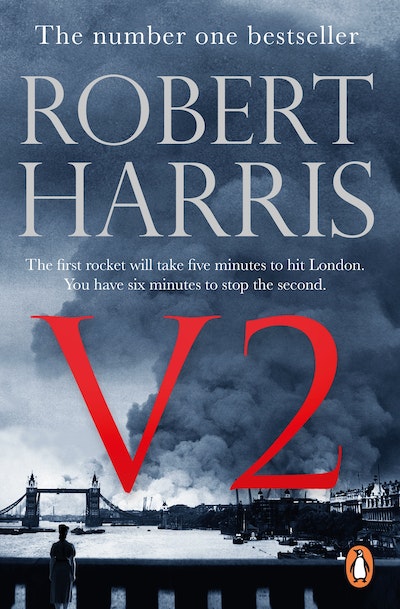 Rudi Graf used to dream of sending a rocket to the moon. Instead, he has helped to create the world's most sophisticated weapon: the V2 ballistic missile, capable of delivering a one-ton warhead at three times the speed of sound.

In a desperate gamble to avoid defeat in the winter of 1944, Hitler orders ten thousand to be built. Graf is tasked with firing these lethal 'vengeance weapons' at London.

Kay Caton-Walsh is an officer in the Women's Auxiliary Air Force who joins a unit of WAAFs on a mission to newly liberated Belgium. Armed with little more than a slide rule and a few equations, Kay and her colleagues will attempt to locate and destroy the launch sites.

As the death toll soars, Graf and Kay fight their grim, invisible war - until one final explosion of violence causes their destinies to collide...
___________________________
'A riveting read with a corker of a twist' Daily Telegraph
'Supremely readable' Observer
'Delivers one hell of a punch' Express
'Captures the real nature of war. Gripping' Ben MacIntyre

An immersive thriller set against a tense historical backdrop . . . For all its pace - you will zip through it in no time - the rewards are in the meta-story. But Harris's deceptively effortless prose means you barely notice. The effect is one of total immersion: you can feel the cold, taste the bacon sandwiches and imagine the trolleys squeaking across the floor.

The king of the page-turning thriller.

75 of the best new books for autumn, i paper

I want to be the first to say it: Robert Harris scores a direct hit with V2. I was enthralled.

V2 is a stunning achievement; a gripping page-turner that remains highly thought-provoking.

Harris renders the historical detail with his customary verisimilitude.

Thrillers of the Month, The Times

Robert Harris has always been ingenious at finding ways to write about the Second World War [...] It's highly readable . . . thrillingly tense.

Harris returns to form with this exhilarating fusion of fact and fiction.

Once again the richly talented Harris returns to his favourite period of history - before, during and after World War II . . . Told with Harris's meticulous eye for detail, and his appetite for the human story at the heart of any drama, it is as compelling as one of the great British black-and-white war films, with a sprinkling of contemporary detail to add colour.'

There are very few others . . . that everyone is gagging to see what they publish next but . . . Robert Harris is [one]

[An] astonishingly precise novel... With its tense plot and familiar characters, some readers may anticipate the novel's own parabolic curve. But this means it offers the satisfactions we expect. Spies and informers lurk. Period details are piquant, but not overdone . . . Above all there's suspense . . . V2 will keep you pinned on a compelling trajectory.

Harris finds the poetry in physics and the soul in engineering. He makes the V2s come to life as vividly as any of his human characters . . . His prose can be wonderfully vivid... Harris has the great gift of readability; there is no living novelist whose books I am likelier to gobble up in one sitting.

As addictively readable as all his other thrillers. Think Foyle's War rewritten by Simenon.

This is a lively read, as propulsive as the rockets of the title, and it masterfully captures the bleak, jaded atmosphere of the Second World War's death throes.

As with all Harris's historical adventures, the material of a thriller is slickly woven into the matter of history . . . He feelingly describes a landscape of bombed buildings, grim knickers, grey skies, mud-blue cars and fish-paste sandwiches.

You know you're in safe hands when you pick up a Robert Harris novel, and V2 is no exception . . . Harris takes both historical fact and technical detail to new heights.

His triumph, as in his previous wartime novel Enigma, is to make very complex technical material easy to digest . . . Harris fans are likely to devour it at an equally dramatic pace.

The descriptions of rocket production and painstaking photographic interpretation are fascinating in their own right, but Harris takes both historical fact and technical detail to new heights through the daily lives and emotions of the central characters

No novelist is better at evoking the gray resilience of wartime Britain, the moral confusion as the Third Reich staggered toward collapse, and the aroma of a bacon sandwich served in a steamy army canteen. The research, as with all of Harris's books, is impeccable, but worn lightly... In the hands of a lesser writer, this damp squib of history might be an impediment, but in the course of this gripping novel Harris captures something of the real nature of war: good ideas that fail, perverted science, grandiosity, lies and unintended consequences.