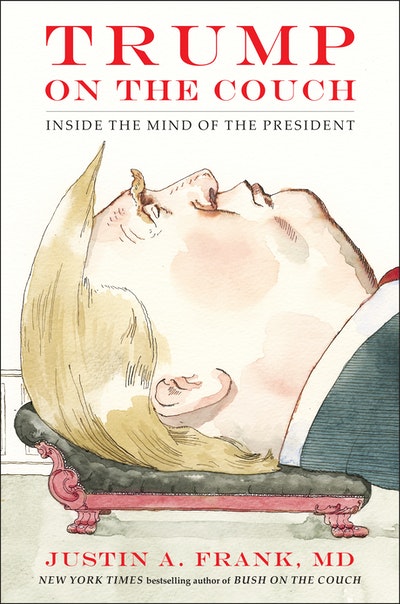 Trump On The Couch

A full psychoanalytic portrait of President Donald Trump by the New York Times-bestselling author of Bush on the Couch and Obama on the Couch.

No president in the history of the United States has inspired more alarm and confusion than President Donald Trump. How can he behave so callously and irresponsibly? Does he pose a true danger to our country?

In answer, noted psychoanalyst Justin A. Frank takes a deep dive into the psyche of our president. Using observations gained from a close study of Trump's patterns of thought, action, and communication, Dr. Frank gives us a full portrait of the personality we saw on display during his remarkable campaign and helps us understand what has driven the decision-making during his first years in office. The result is filled with important revelations about our nation's leader--including disturbing new insights into:
- the absence of a strong maternal force during childhood, which has led to Trump's remarkable lack of empathy and disregard for women's boundaries;
- the compulsion to polarize America, which has grown out of his mind-set that the world is full of deceitful and destructive persecutors;
- his inability to tolerate the pain of frustration, which triggered his belief that omnipotence will finally remove it;
- the emotional deprivation of his childhood, which he replaced--and is still replacing--with delusions of complete autonomy, never allowing himself to display any vulnerability.

With a thoughtful analysis of how and why he inspires such devotion in his followers, Trump on the Couch offers a candid assessment of the man who is arguably the most psychologically damaged president we have yet had.