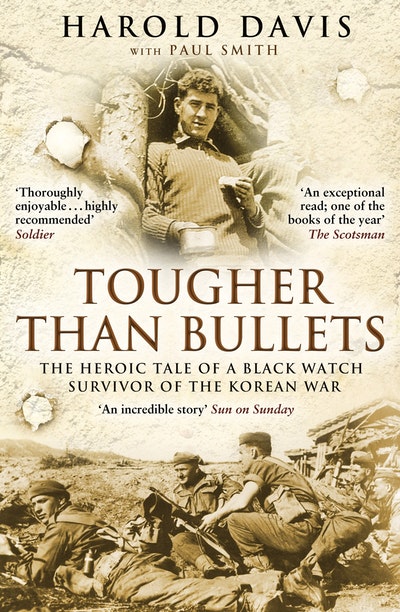 As Harold Davis fell under heavy machine-gun fire, his body riddled with bullet wounds and life seemingly slipping away from him, he could not have realised that he was one of the Korean War’s more fortunate soldiers. American medics sprang into action and, against all odds, saved the plucky young Scot, a man who proved tougher than the bullets the brutal enemy showered him with.

Unlike tens of thousands of those who fought in Korea in the 1950s, he lived to tell the tale of his horrific experiences on the front line. Now, for the first time, the Black Watch hero shares his vivid and harrowing memories.

A man of tremendous grit and determination, Davis was pieced back together during almost two years in hospital. He defied doctors to return to his pre-war career as a professional footballer, building a reputation as one of Scotland’s most feared and revered defenders at Rangers FC.

Harold Davis began his professional football career with East Fife in 1950 and was drafted for national service the following year. He was seriously injured during the Korean War and spent almost two years in recovery. He played for Rangers between 1956 and 1964, during which time he made 261 appearances in the first team and won a string of honours to earn a place in the Ibrox hall of fame. Now 78, Davis devotes much of his time to supporting the Erskine Trust.

Paul Smith has been working as a journalist in the Scottish national, regional and local press for more than 15 years, covering news and sport. As an author, he has penned a series of football titles, including To Barcelona and Beyond: The Men Who Made Rangers Champions of Europe, Shooting Star: The Colin Stein Story and Rangers' Cult Heroes. He lives in Kintore, Aberdeenshire and is the son of former Rangers and Scotland player David Smith.

Praise for Tougher Than Bullets

An exceptional read; one of the books of the year