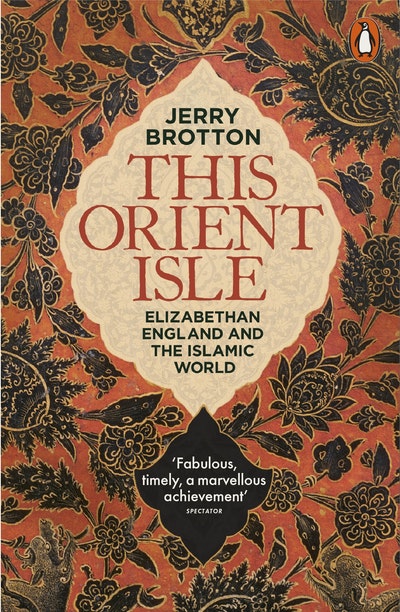 Elizabethan England And The Islamic World

In 1570, after numerous plots and assassination attempts against her, Elizabeth I of England was excommunicated by the Pope. It was the beginning of cultural, economic and political exchanges with the Islamic world of a depth not again experienced until the modern age. England signed treaties with the Ottoman Porte, received ambassadors from the kings of Morocco and shipped munitions to Marrakech in the hope of establishing an accord which would keep the common enemy of Catholic Spain at bay.

This awareness of the Islamic world found its way into many of the great English cultural productions of the day - especially, of course, Shakespeare's Othello and The Merchant of Venice. Less well known is that in 1599 Thomas Dallam, who made the organ for King's College in Cambridge, was sent to Istanbul to play in front ofSultan Mehmed.

This Orient Isle shows that England's relations with the Muslim world were far more extensive, and often more amicable, than we have ever appreciated, and that their influence was felt across the political, commercial and domestic landscape of Elizabethan England. Jerry Brotton, one of the UK's leading experts on cultural exchange, gives this neglected history the fullest study it has ever received.

Praise for This Orient Isle

I adored this book, it resonated deeply with me.

This Orient Isle is an exceptionally rich and brilliant book. In bringing to life Elizabethan England's ambivalent engagement with Islam, Jerry Brotton shows how profoundly that encounter shaped English trade, diplomacy, and the Islam-obsessed drama of Shakespeare and his contemporaries. The story he tells could not be more timely.

In a fascinating account, Jerry Brotton uncovers the lively exchange - of traders, diplomats, gifts, and letters - between Elizabeth's England, the Ottoman Empire, and Morocco. Christianity and Islam were still at odds, but Elizabeth gladly sought alliance with Muslim lands against the shared threat of Catholic Europe. This Orient Isle shows how the Muslim presence shaped Elizabethan politics and culture and gives us a new way to think of that presence in our own time.

Natalie Zemon Davis, author of, The Return of Martin Guerre and Trickster Travels: A Sixteenth-Century Muslim Between Worlds

For the title of his impressive and highly readable new study of Anglo-Islamic relations under Elizabeth I, Jerry Brotton has chosen to adapt the description in Shakespeare's Richard II of "this sceptred isle", the most famous account of England as a proudly insular nation... rather than suggesting two fundamentally opposed cultures destined to clash, Brotton emphasises the extent to which Elizabethan England was shot through with influences, stories, individuals and products drawn from the Islamic world. The Orient is not elsewhere but already here, both thrillingly and uncomfortably close to home... [Brotton] tells this complex story with scrupulous care... This polyglot world comes cacophonously and vividly to life when Brotton describes a ship carrying English travellers, Persians and Portuguese monks that was pounded by a storm in the Caspian Sea ... When Brotton relates these travels his book crackles with an energy that illuminates and vivifies its larger claims ... He resoundingly insists the Elizabethan age, for all its opposed fanaticisms and pockets of enlightenment, was characterised above all by "messy and uneasy coexistence".

With Henry VIII's break with Rome and then (in 1570) Elizabeth's excommunication as a "heretic" by Pope Pius V, England found itself shunned as a rogue state by Catholic Europe. It needed friends with clout in strategic locations. Around the Mediterranean and the Middle East, only the lands of Islam could supply them. Thus the stage was set for an extraordinary half-century of adventures, deals, conspiracies and misunderstandings: a little-known story that Brotton chronicles with scholarship, assurance, and not a little charm. He tells a very English story: the quest for the sweet deal and the quick groat usually trumps theological niceties.

As Brotton shows, for the last quarter of Elizabeth's reign, England was deeply engaged with the three great powers of the Islamic world: Persia, the Ottoman Empire and Morocco... Brotton is especially good of charting the doublethink involved in this effort... Where Brotton excels in his exploration of the ways that English dalliances in the Islamic world filtered into Elizabethan popular culture during the 1590s.

As Jerry Brotton explores in his well-researched new book, Elizabeth had always been keen on dealing with the east... this beautifully presented book shines an important light on a world of diplomatic intrigue and unexpected alliances-where mutual interest and trade trumped entrenched religious affiliation.

Jerry Brotton's sparkling new book sets out just how extensive and complex England's relationship with the Arab and Muslim world once was, and tentatively connects the threads of that engagement to our own times... It seems extraordinary that, in a time before mass travel, when most people died a stone's throw from where they were born, there were nevertheless those whose adventures led them to the edges of the known world - and to cultures so different from their own as to seem dreamlike. But Brotton's book is full of them... These individual stories form part of a rich tapestry of interaction that was ultimately directed by the geopolitics of the day... At a time when many see Islam as a recent and strange intruder, Brotton's excellent history is a reminder that a careful study of England's "island story" shows just how wrong they are.

This is a vivid, significant work of scholarship... Much of Brotton's narrative of Mediterranean arms dealing reads like an episode of le Carré's The Night Manager: spies, subterfuge and weapons of mass destruction... Cultural exchanges with Islam were part of the warp and weft of the Elizabethan English experience [and] Brotton, professor of Renaissance studies at Queen Mary University of London, reads Elizabethan playwrights with a sharp eye and a dry sense of Tudor irony... Brotton has set out to prove that Islam's relationship with Britain has for much of our history-and still can be-deeply integrated and mutually prosperous... As Brotton artfully and learnedly demonstrates-over the 300 pages of this impressive, enjoyable book-it's all in the detail.

There is no question that Jerry Brotton's exploration of "a much longer connection between England and the Islamic world" than is generally appreciated has currency. His canvas takes in places with "tragic resonance" for our age, among them Raqqa, Aleppo and Fallujah. But resisting the temptation to draw parallels between then and now, Brotton crafts a purely 16th-century narrative set on two geographical fronts.We follow pioneer embassies to Constantinople, Marrakesh and Qazvin (the former Persian capital) alongside the growing hold the Islamic world exerted on the English from the time of Henry VIII, a fascination that would find powerful expression in Elizabethan cuisine, fashion and theatre... there is much in these pages to delight and provoke... This Orient Isle is a richly resonant work which not only recasts our understanding of the Elizabethan era but also reveals Islam, crucially, as "part of the national story of England".

Jerry Brotton's fabulous new book [reveals] just how deep and entangled the roots of the Islamic and Christian faiths were in the early modern period.Brotton's view of Elizabethan England as an "Orient Isle" contests the idea of the nation existing in splendid or belligerent isolation from the Islamic world, a "sceptered isle... a fortress... against infection" as John of Gaunt puts it in Richard II...Brotton expertly demonstrates how the Islamic world was always much closer to the national poet's sense of a happy ending or tragic subjectivity than we might ever have thought. Brotton's Shakespeare is no liberal or post-colonial commentator avant la lettre (a figure who haunts much academic discussion about Shakespeare on race or religion). He is, instead, a brilliant artist enthralled by contemporary politico-religious uncertainties about England's place in Europe and the competing claims of Christianity and Islam. Brotton's own book is itself a timely intervention and a marvellous achievement.