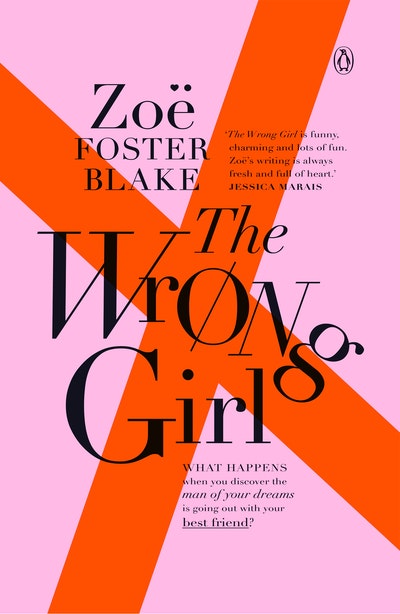 Lily pulled her phone out of her pocket and checked the time: 7.25. Pete was meant to be here at seven p.m. He was bringing the new season of Boardwalk Empire over on his laptop, they were ordering pizza and she had a posh bottle of shiraz she’d swiped from work; things might not get much better than that.

Lily checked her appearance briefly in the mirrored splashback above the sink as she poured some corn chips into a bowl. She was wearing her trusty denim shorts and a dark-blue singlet. A small gold chain with a tiny bird circled her neck; since her long hair was freshly washed and boofy, she’d tied it up into a high bun.

She took the corn chips into the lounge and carefully manoeuvred her housemate Simone’s fancy aromatherapy-humidifier-thingy off the table. Even though Simone was earning terrific coin as a very successful model, she was ultimately determined to open a wellness and nutrition centre, catering to the precise kind of cool, slim, beautiful people who didn’t need help. Simone’s fanaticism for wellbeing pervaded the entire house; there was always something sprouting or fermenting on the kitchen bench, and wheatgrass growing on the windowsills. Rooibos and oolong tea, buckwheat flour and LSA had long since taken over the pantry, leaving very little room for Lily’s barbecue shapes and shake-a-pancake mix.

After living together for three years, Lily was still resistant to Simone’s food choices. It wasn’t as though Sim had been subtle about trying . . . freshly made date and orange gluten-free cookies here, roast tamarind tofu on brown rice there – her part-time job at a health food cafe didn’t help – but Lily remained resolute in her diet of Turkish bread, Corn Flakes, pasta and white rice. In fact, the more Simone lectured and spruiked her way of life, the more Lily resisted it. She actually preferred Sim’s homemade quinoa porridge over her Uncle Toby’s sachets, but she was too far gone to admit it.

Lily heard a knock downstairs and bounded down to get the door.

I forgot the fucking wine.’ Pete looked ruefully at Lily as she opened the door.

‘I have some,’ she said, as he stepped inside and kissed her on the cheek. He looked positively homemade with his scruffy brown hair, black floppy hat, vintage Led Zeppelin T-shirt and dirty old jeans. What a grub. Simone said he dressed like he was in a band to compensate for the fact he was merely a publicist for bands. Lily just thought he looked like, well, Pete.

‘And as if I wasn’t already the best,’ she said, walking inside towards the lounge room, ‘I ordered our pizza to be delivered at eight. Hawaiian with mushrooms and olives, and a margherita with pepperoni. Plus pistachio and white-chocolate gelato.’ Lily beamed with pride.

As she turned to see his delight at her good pizza-ordering work, her face fell. He had his phone out and was barely listening. As usual. These days he was always on Blendr or Tinder or whatever new hook-up app was cool. He had tried to get Lily to do the same, but she maintained she’d rather stay single forever than hunt on her phone for same-suburb sex with creeps.

‘So!’ he said as he collapsed on the sofa and kicked off his filthy brown ankle boots, crossing one ankle over the other as he lay down on his back. ‘How was Byron? Have any fun? You got back yesterday, yeah? Did Simone make you do soft-sand beach runs and drink green juice all weekend while she banged on about spiritual nirvana?’

‘No way. We were too busy making out with all these really cool, rich, hot guys and drinking espresso martinis.’

‘You were drunk and falling off stools is what I heard. It was the best of times, it was the mess of times . . .’ His eyes were flickering with mischief.

‘I had fun; I’m glad I went,’ Lily said indignantly as she walked to the kitchen and poured the wine. ‘Here you go,’ she said, handing a glass to Pete who had shuffled up and made room for her on the sofa.

‘Did you get a big dirty new year’s eve pash?’ he asked.

Lily had, in fact, got a new year’s eve pash, but it was under the duress of Simone’s insistence – ‘Um, you’re single, you know’ – and she couldn’t recall his name or face. He’d kept calling her Eurasian, which was so tired. Her dad was half Japanese, which made her as Japanese as a taco, in her opinion. She had slightly almond-shaped eyes and almost-black straight hair, and that was the extent of it. Her freckles and light-hazel eyes felt pretty Aussie to her.

‘I did, actually. Wouldn’t know him if I fell over him, but that doesn’t mean he wasn’t a nice guy. A gent, from memory – walked me home and bought me a kebab because Sim was busy with her millionaire lover.’

‘Walked you home. Please. Walked you to bed, more like it.’

‘Actually, I remember telling him my sister was inside sick and that he couldn’t come in,’ Lily laughed at her deception, but Pete was back on his phone.

‘So who was your new year’s eve prey?’ she asked, trying to gain precedence over whatever had his fingers rapidly flicking over the screen of his phone. Lily couldn’t be sure there would’ve been just one target. Pete was in turbo-single mode after a long relationship and making the most – the very most – of it. He’d even become flirtier with Lily, which she found slightly unsettling but not entirely annoying.

‘Reply hazy, try again,’ he said in Magic 8 Ball-speak, which they had done with each other for years. He finally jammed his phone back into his jeans and looked at her.

‘Oh, stop it. I’m adorable.’ He put his wine glass on the coffee table and lay back, sinking into the big, plush cushions.

God, he was actually becoming a bit much, Lily thought. She didn’t really know what to make of him tonight. She’d almost prefer they were back in plain old friends mode. It was better than all of this weird, loaded innuendo.

Lily got up and went to the kitchen again, returning with some lazy ‘guacamole’ she’d made with one avocado and some salt and pepper. Despite being a producer on the cooking segment of a TV show, she was an astonishingly average cook. She preferred being the eater, not the maker. She took a chip, scooped up some dip, and promptly dropped the whole thing on her T-shirt as she chartered it to her mouth.

‘I have to, I have guacamole all over my top,’ she said, without missing a beat.

As she walked upstairs to switch tops. she heard the door buzzer go.

‘Can you get that? It’ll be the pizza!’ she yelled while rifling through her drawers for something else to wear. She threw on a black tank and darted back downstairs to the lounge room, just in time to see Pete going through her bag.

He looked up. ‘I’m outta cash, and the loser at the door insists on being paid for the pizza.’ He grabbed two twenties from her wallet and shot down to the front door.

Something fired up in Lily’s gut; he was late, and hadn’t brought wine or money. This was pretty much standard Pete, but tonight it was annoying. She exhaled and tried to just Have Fun.

Two hours later, brimming with pizza and moving onto a bottle of white wine they’d found in the fridge (Lily hoped it wasn’t one of Simone’s expensive ones), the two friends lay watching a particularly excellent episode of Boardwalk Empire with only the TV screen illuminating their faces.

‘What time will you drag your hangover into work tomorrow?’ asked Pete as the closing credits ran. It was the first week in January, and many friends had already returned to work.

‘I don’t go back til next Monday,’ Lily said gaily.

‘Ah, yes, I forgot that TV stars need more holidays than us plebs.’ One of Pete’s favourite things was to tease Lily about her job, even though technically his was far wankier.

‘We’re not back on air until the following week; there’s not much point us all being in there this early. No one would do any work anyway.’

Lily turned and looked into Pete’s eyes, and weirdly, she just knew. Knew that finally The Moment had arrived. She shouldn’t have been too surprised; she had invited him over and shared two bottles of wine with the guy. They were both single and drunk. She knew it was a possibility; she’d assumed it might eventually happen. But still, her heart was pounding and her mouth was suddenly devoid of saliva and there was all kinds of weird twitching in her gut. She was so shit at this stuff.

Pete leaned in to her and kissed her gently on the lips.

‘I’ve always wondered what that’d be like,’ he said. And Lily was surprised to find it wasn’t weird at all.

Lily smiled and they kissed again, this time a long, slow, gentle one that did exciting things to Lily’s lower body, and confusing things to her brain. As they continued to kiss, Pete leaned back on the cushions and pulled Lily down onto him, wrapping his hands around the small of her back. He smelled intoxicating – it was the usual Pete fragrance but with the sweet, salty undertone of his skin. He gently stroked her back as he kissed her with more urgency and Lily responded, pushing herself into his body, ever so subtly. Soon he was lying entirely on his back on the sofa, with Lily directly on top of him mirroring his increasingly hungry kisses. She felt his hands move down to her arse, which he caressed and squeezed, and as she ran her fingers through his hair, gripping the occasional handful, they kissed feverishly. She knew what was happening next.

Pete suddenly pulled back his head to look at the now quite flushed Lily. ‘Should we take this fun new game upstairs?’

‘Mmm . . . I guess signs point to yes,’ she said, and, deciding to just go with it – the wine happily, loudly encouraging her – she pulled herself off his body and stood up, walking upstairs, knowing he would follow.

‘Oh, don’t worry, I’m not,’ she said, turning to smile at him, wondering if she was, in fact excited or not. Either way, it had been quite a while, and who better to break a drought with than a friend. More than a friend? Maybe . . . She pushed the mind-chatter away and tried to focus on the stairs, which seemed to be whooshing away much faster than they usually did. Here goes.

What happens when you discover the man of your dreams is going out with your best friend?