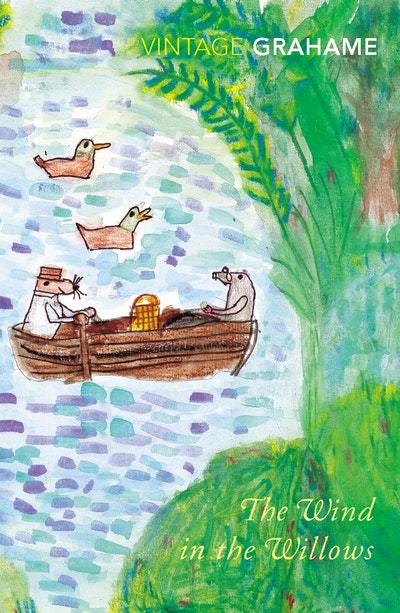 The Wind in the Willows

The day that Mole abandons his spring-cleaning and sets out to enjoy the sunshine is the start of many adventures. Not only does he discover the river and the joys of messing around in boats, but he also makes lifelong friends with Rat, Badger and the eccentric and incorrigible Toad.

Kenneth Grahame was born in Edinburgh on 8 March 1859. He was brought up by his grandmother in Cookham Dene in Berkshire and went to school in Oxford before starting work at the Bank of England. He was unable to go to university because of his family's lack of money. His stories and essays were initially published in periodicals such as the Yellow Book and then collected together as Pagan Papers (1893). This was followed by The Golden Age (1895) and Dream Days (1898). The Wind in the Willows (1908) is based on letters and stories that Graham made for his only child, Alistair. The novel's popularity grew slowly over the years and A.A. Milne's dramatisation of the novel as Toad of Toad Hall brought it greater success. Kenneth Grahame died on 6 July 1932.

Praise for The Wind in the Willows

It is in the same category as Great Expectations or Tom Jones, because despite its brevity and its simplicity it has a deep strangeness which is never dulled by successive readings

Now I have read it and reread it, and have come to accept the characters as old friends.... Indeed, I feel about going to Africa very much as the sea-faring rat did when he almost made the water-rat wish to forsake everything and start wandering!

For generations of English children, the gentle adventures of Mole, Rat, Badger, Toad and the other characters from The Wind In The Willows have been part of the magic of growing up; a world of innocence and simplicity too soon left behind

It is a book that breaks nearly every rule of modern children's fiction...it wasn't about fairies at the bottom of the garden, but it was about magic - just the right kind of magic. It thrills me still to read it.