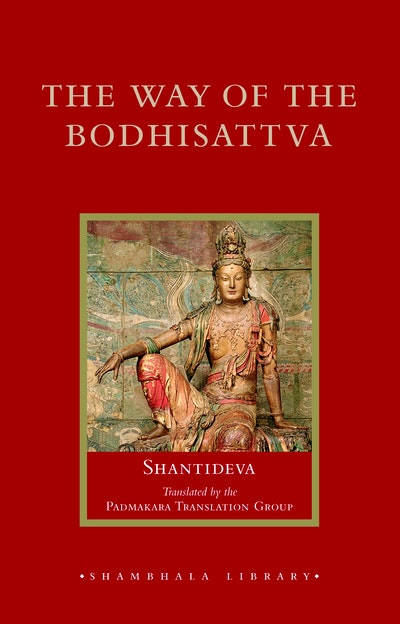 The Way of the Bodhisattva

Treasured by Buddhists of all traditions, The Way of the Bodhisattva (Bodhicharyavatara) is a guide to cultivating the mind of enlightenment and to generating the qualities of love, compassion, generosity, and patience. This text has been studied, practiced, and expounded upon in an unbroken tradition for centuries. Presented in the form of a personal meditation in verse, it outlines the path of the Bodhisattvas—those who renounce the peace of individual enlightenment and vow to work for the liberation of all beings and to attain buddhahood for their sake.
This version is translated from the Tibetan and includes a foreword by His Holiness the Dalai Lama, a translator’s preface, a thorough introduction, a note on the translation, and three appendices of commentary by the Nyingma master Kunzang Pelden.

Shantideva was a scholar in the eighth century from the monastic university Nalanda, one of the most celebrated centers of learning in ancient India. According to legend, Shantideva was greatly inspired by the celestial bodhisattva Manjushri, from whom he secretly received teachings and great insights. Yet as far as the other monks could tell, there was nothing special about Shantideva. In fact, he seemed to do nothing but eat and sleep. In an attempt to embarrass him, the monks forced Shantideva's hand by convincing him to publicly expound on the scriptures. To the amazement of all in attendance that day, Shantideva delivered the original and moving verses of the Bodhicharyavatara. When he reached verse thirty-four of the ninth chapter, he began to rise into the sky, until he at last disappeared. Following this, Shantideva became a great teacher.