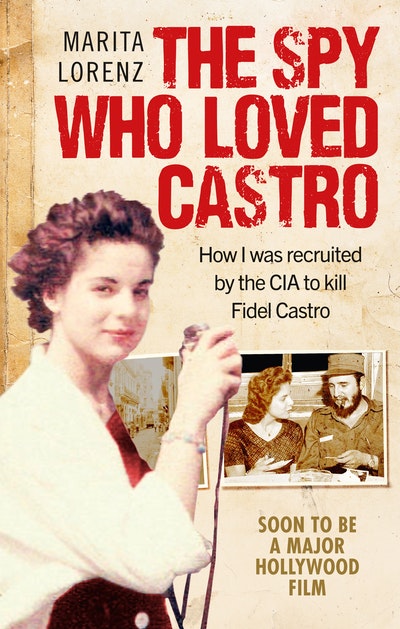 The Spy Who Loved Castro

How I was recruited by the CIA to kill Fidel Castro

The fascinating story of Marita Lorenz, now the subject of a major film starring Jennifer Lawrence

Few can say they've seen some of the most significant moments of the twentieth century unravel before their eyes. Marita Lorenz is one of them.

Born in Germany at the outbreak of WWII, Marita was incarcerated in a Nazi concentration camp as a child. In 1959, she travelled to Cuba where she met and fell in love with Fidel Castro. Yet upon fleeing to America, she was recruited by the CIA to assassinate the Fidel. Torn by love and loyalty, she failed to slip him the lethal pills.

Her life would take many more twists and turns - including having a child with ex-dictator of Venezuela, Marcos Pérez Jiménez; testifying about the John G Kennedy assassination; and becoming a party girl for the New York Mafia, as well as a police informant.

Caught up in Cold War intrigue, espionage and conspiracy - this is Marita's incredible true story of a young girl, turned spy.

Ilona Marita Lorenz was born in Germany in 1939 and as a child, was interned in Bergen-Belsen concentration camp. In the years that followed, she often sailed with her father who was captain of a ship and in 1959, she met Fidel Castro, with whom she fell in love with. Later the CIA would recruit and send her to assassinate Fidel – and act she was unable to commit. Her life would take many more twists and turns – including having a child with ex-dictator of Venezuela, Marcos Pérez Jiménez; testifying about the John G Kennedy assassination; becoming a party girl with close ties to the New York Mafia, as well as a police informant. She lives in America.