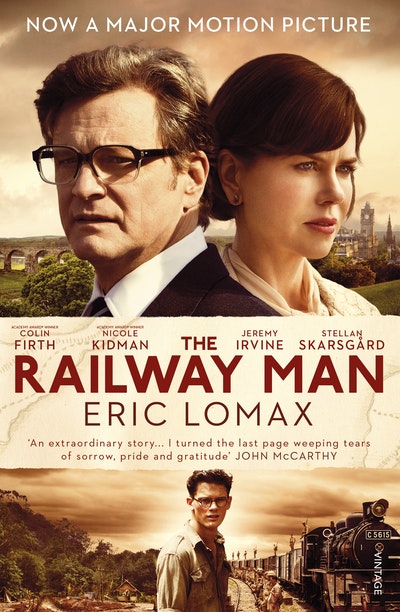 The number one bestseller behind the major film starring Colin Firth, Nicole Kidman and Jeremy Irvine

During the Second World War Eric Lomax was forced to work on the notorious Burma-Siam Railway and was tortured by the Japanese for making a crude radio.

Left emotionally scarred and unable to form normal relationships, Lomax suffered for years until, with the help of his wife, Patti Lomax, and of the Medical Foundation for the Care of Victims of Torture, he came terms with what happened. Fifty years after the terrible events, he was able to meet one of his tormentors.

The Railway Man is a story of innocence betrayed, and of survival and courage in the face of horror.

Eric Lomax was born in 1919. During the Second World War he was captured and tortured by the Japanese Army and forced to work on the notorious Burma-Siam railway. He met and forgave his torturer in 1995. He died in October 2012.

Praise for The Railway Man

When I turned to the book, the complexity of Lomax's emotions came alive and burned off the page

Of all the billions of words that have been written about the Second World War, with the exception of Churchill's Nobel Prize winning history, it is not an exaggeration to say there is no account of it more worth reading that this. Wistfully romantic, historically important, startling, horrifying and ultimately electrifyingly uplifting, The Railway Man is as indispensable as any book can be.

This is a harrowing but very honest and ultimately compassionate memoir

Now is the time to read the true life story of Scot Eric Lomax... A story of courage and survival

This beautiful, awkward book tells the story of a fine and awkward man. Here, I think, is an account that rises above mere timeliness and comes near to being a classic of autobiography

It made me cry, I felt angry at man's inhumanity to man and yet uplifted by the way Eric finally came to terms with the suffering he'd endured and was able to forgive

A story worth preserving

Brutally honest, controlled and understated... Lomax's story is a testament to humanity, in all its forms

This book has to be read