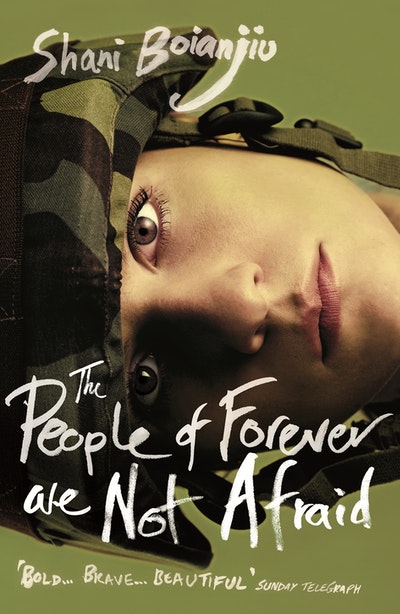 The People of Forever are not Afraid

Longlisted for the Women’s Prize for Fiction

Yael, Avishag and Lea grow up together in a tiny, dusty village in Israel. They attend high school, gossip about boys, and try to find ways to alleviate the universal boredom of teenage life. Then at eighteen they are conscripted into the army.

Yael trains marksmen, Avishag stands guard watching refugees throw themselves at barbed-wire fences and Lea, posted at a checkpoint, imagines the stories behind the familiar faces that pass by her day after day. All of them live in that single intense second before danger erupts, all of them trying to survive however they can…

Shani Boianjiu was born in 1987 in Jerusalem, and she served in the Israeli Defense Forces for two years. Her fiction has been published in Vice magazine, Zoetrope and the New Yorker. Shani is the youngest recipient ever of the US National Book Foundation’s 5 under 35 Award. Her first novel, The People of Forever are Not Afraid, was published in 2013 and longlisted for the Women's Prize. She lives in Israel.

Praise for The People of Forever are not Afraid

In a humorous and beguiling deadpan, Boianjiu conveys the fleeting, vanishing experience of hovering between adolescence and adulthood, at the same time as providing a rare portrait of young Israelis being minced through military service

A memorably bold novel... Somewhere between the sardonic humour of Etgar Keret and the epic storytelling of David Grossman, Boianjiu has created a brave, beautiful, political literature that is entirely her own

This unflinching debut novel depicts with depth and acuity the disorientating effects of fear on young minds... The girls are often lost for words, but the author successfully finds a voice to express the dehumanising horror of warfare in this fragmented plot held together with a passionate, poetic eloquence

[Boianjiu’s] voice is distinct. It’s confident, raw, amusing — a lot like her women

More full of life than any young writer I’ve come across in a long time.

Nicole Krauss, author of THE HISTORY OF LOVE

Reads like it was written in bullets, tear gas, road flares and love. I demand another book from her, immediately.

The focus of Boianjiu’s book isn’t those horrible events: it is the tension that exists just outside the line of fire, the moment before a crisis erupts. Boianjiu’s best writing happens as the book progresses, when the teens let their minds wander into what they have experienced, and imagine an apocalyptic future for their country

Unique and piercing... Reading it feels like having your heart sawn in two.

Etgar Keret, author of SUDDENLY, A KNOCK ON THE DOOR

In this Bildungsroman, life in the army initiates a metamorphosis from girl to woman…Boianjiu’s depiction of…the psyches of these young women is fascinating… The prose [reads] alternately like a nightmare and a dream, but this feverish indecision is what gives it its power

The People of Forever Are Not Afraid is... carefully wrought, consciously structured, creatively imagined

With its blend of brutal hilarity and heart-stopping anguish, this is a brilliant debut novel

In her riveting debut novel, 25-year-old Shani Boianjiu gives a rare insider glimpse at what it’s like to be a girl coming of age in the famously fierce Israeli Defense Forces

A dark, riveting window into the mind-state of Israel's younger generation, The People of Forever Are Not Afraid marks the arrival of a brilliant writer

Honest... Shani Bioanjiu has given us a valuable addition to our understanding of the Israel/Palestine conflict