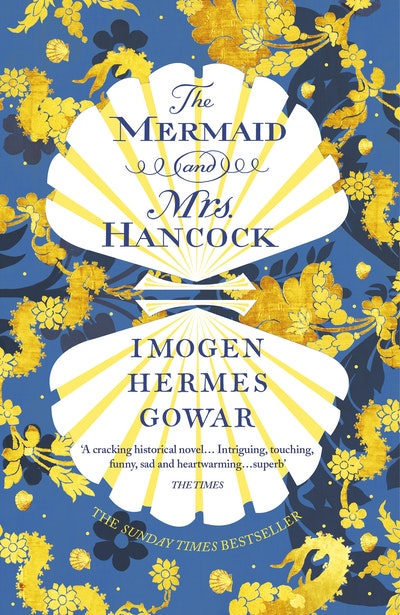 The Mermaid and Mrs Hancock

Jonah Hancock’s counting-house is built wedge-shaped and coffered like a ship’s cabin, whitewashed walls and black skirting, beam pegged snugly to beam. The wind sings down Union Street, raindrops burst against the windowpane, and Mr Hancock leans forward on his elbows, cradling his brow in his hands. Rasping his fingers over his scalp, he discovers a crest of coarse hair the barber has missed, and idles over it with mild curiosity but no irritation. In private, Mr Hancock is not much concerned with his appearance; in society, he wears a wig.

He is a portly gentleman of forty-five, dressed in worsted and fustian and linen, honest familiar textures to match his threadbare scalp, the silverish fuzz of his jowls, the scuffed and stained skin of his fingertips. He is not a handsome man, nor ever was one (and as he perches on his stool his great belly and skinny legs give him the look of a rat up a post), but his meaty face is amiable, and his small eyes with their pale lashes are clear and trusting. He is a man well designed for his station in the world: a merchant son of a merchant’s son – a son of Deptford – whose place is not to express surprise or delight at the rare things that pass through his rough hands, but only to assess their worth, scratch down their names and numbers, and send them on to the bright and exuberant city across the river. The ships he sends out into the world – the Eagle, the Calliope, the Lorenzo – cross and re-cross the globe, but Jonah Hancock himself, the stillest of men, falls asleep each night in the room in which he first drew breath.

The light in the office has a murky cast to it, full of storms. The rain comes down in sheets. Mr Hancock’s ledgers are spread out before him, creeping with insect words and figures, but his mind is not on his work, and he is grateful for the distraction of a scuffling outside the office.

Ah, thinks Mr Hancock, that will be Henry, but when he turns around from his desk it is only the cat. She is almost upside down at the foot of the stairs, with her rear in the air, her hind paws splayed wide on the bottom step, and her forepaws pinning a squirming mouse to the hall floorboards. Her little mouth is open, teeth flashing in triumph, but her position is precarious. To right herself, he calculates, she must let go of her quarry.

‘Whisht!’ says Mr Hancock. ‘Begone!’ but she catches the mouse up in her jaws and prances across the hall. She is out of his sight, but he hears the thrum of her dancing paws and the dampish thud of the mouse’s body hitting the floorboards as she flips it into the air again and again. He has watched her play this game many times, and always finds her enquiring, open-throated cry unpleasantly human.

He turns back to his desk, shaking his head. He could have sworn it was Henry coming down the stairs. In his mind’s eye the scene has already taken place: his tall thin son, with white stockings and brown curls, pausing to grin into the office while all about him the dust motes sparkle. Such visions do not come to him very often, but when they do they always disturb him, for Henry Hancock died at birth.

Mr Hancock is not a whimsical man but he has never been able to shake the notion that, the moment his wife laid her head back on her childbed pillow and sighed her last wretched breath, his life diverged from its proper course. It seems to him that the one he ought to have had continues very nearby, with only a thin bit of air and chance separating him from it, and every now and then he catches a glimpse of it as if a curtain has momentarily fluttered aside. In the first year of his viduity, for example, he once felt a warm human pressure against his knee during a card game, and looked down in fond expectation of a stout little child hauling itself to its feet beside his chair. Why was he so appalled to discover instead the left hand of Moll Rennie creeping along his thigh? On another occasion, a brightly painted toy drum caught his eye at a fair, and he had carried it nearly halfway home before he remembered that no small boy was there to receive it. Fifteen years have now passed, but in rare unguarded moments Mr Hancock might hear a voice carried in from the street, or feel some tugging at his clothes, and his immediate thought is Henry, as if he had had a son all along.

He is never visited by his wife Mary in this way, although she was a great blessing to him. She was thirty-three when she died, a placid woman who had seen much of this world and was amply prepared for the next: Mr Hancock does not doubt where she has gone, or the possibility that he might one day join her there, and for him this is enough. He only mourns their child, who passed so swiftly from birth to death, exchanging one oblivion for another like a sleeper rolling over.

From upstairs comes the voice of his sister Hester Lippard, who visits every first Thursday to fossick through his larder and laundry and linen press, and exclaim at what she discovers there. A wifeless brother is a troublesome inheritance, but one by which her children may one day profit: if Mrs Lippard does him the charity of removing her youngest from school to serve as his housekeeper, it is in reasonable expectation of reward.

‘Now you see the sheets have taken mildew,’ she is saying. ‘If you had stored them as I advised you … did you note it all in your pocketbook?’

The faintest of mumbles in response.

‘Well, did you? This is not for my benefit, Susanna, but for your own.’

A silence, in which he pictures poor Sukie with her head hanging, her cheeks livid.

‘I declare, you make more trouble than you save me! So where is your red thread? Where? Is’t lost again? And who will pay for more, do you think?’

He sighs and scratches. Where is the fruitful family to fill the rooms of this house, which his grandfather built and his father made fine? The dead are here, without a doubt. He feels their touch everywhere in its pitched floorboards and staircase spine, and in the voices of the church bells, St Paul’s at the front door, St Nicholas’s at the back. The hands of the shipwrights are alive here in the long curves of its beams, which recall the bellies of great ships; its lintels carved with birds and flowers, angels and swords, testament for ever to the labour and visions of men long dead.

There are no children here to marvel in their turn at the skill of Deptford woodcarvers, unmatched in all the world; nor to grow up to the rhythm of ships leaving the docks gleaming and laden, returning battered and ragged. Jonah Hancock’s children would know, as Jonah Hancock knows, what it is to load one’s faith and fortune on board a ship and push it off into the unknown. They would know how a man who awaits a ship, as Mr Hancock now does, is distracted by day and wakeful by night, prone to fidgeting, with a bitter taste rising in the back of his throat. He is snappish with his family or else overly sentimental; he hunches over his desk scratching out the same calculations over and over again. He bites his nails.

What knowledge is all this if it dies with Jonah Hancock? What good his joys and sorrows if there is nobody to share in them; what purpose to his face and voice if they are only to be assigned to dust; what value to his fortune if it withers on the vine with no sons to pluck it down?

And yet sometimes there is something more.

All voyages start the same, when men in coffee-houses gather about, and scratch their chins, and weigh risk against obligation.

for in this world there is no achieving anything all alone. Cast in thy lot and share the purse. And this is why a prudent man does no business with drunks, with rakes, with gamblers, with thieves, or anybody with whom God might have cause to deal severely. You cast in your lot and you share his sin. And it is so easy for a little craft to be dashed against the rocks. So easy for cargo to settle five fathoms deep in the dark. Sailors’ lungs may brine and their fingers may pickle; all that protects them is God’s cupped hand.

What does God say to Mr Hancock? Where is the Calliope, whose captain has sent no word in eighteen months? The summer trails away. Every day the mercury drops. If she does not return soon she will not return, and the blame may well lie with him. What has he done, that might demand such punishment? Who will throw in their lot with his if they suspect him ill-favoured?

Somewhere a tide is turning. In that place where no land can be seen, where horizon to horizon is spanned by shifting twinkling faithless water, a wave humps its back and turns over with a sigh, and sends its salted whispering to Mr Hancock’s ear.

This voyage is special, the whisper says, a strange fluttering in his heart.

It will change everything.

And all of a sudden, in his silent counting-house, this faded man with his brow cupped in his hands is gripped by a great childish glee of anticipation.

The rain eases. The cat crunches on the skull of the mouse. And as she slaps her tongue about her muzzle, Mr Hancock permits himself to hope.

A spellbinding story of curiosity, love and obsession from the phenomenal Sunday Times bestseller