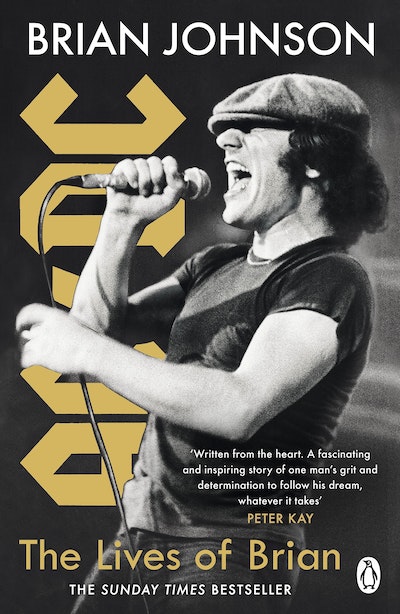 The Lives of Brian

Warm, evocative and laugh-out-loud funny, The Lives of Brian tells the story of AC/DC's legendary front man in his own inimitable voice

'It wasn't me. I didn't do it. And I'll never do it again!' says Brian Johnson of The Lives of Brian. That AC/DC's legendary front man got to do it all is one of the most cheering and entertaining stories in rock 'n'roll history.

The son of a British army sergeant-major and Italian mother, Brian grew up in Dunston, Tyne and Wear, as it emerged from the shadow of the Second World War. Then he saw Little Richard on the BBC and it changed the course of his life.

The choirboy and cub scout was going to be singer.

For over a decade he tried to make his mark with a succession of bands. He appeared on to Top of the Pops, toured Australia and yet the big time looked out of reach. Then he was invited to London for an audition for one of the world's biggest rock acts. AC/DC were a band in crisis following the tragic death of their lead singer, Bon Scott, but with Brian on board they would record their masterpiece: Back in Black. It became the biggest selling rock album of all time. The tour that followed played to packed out arenas. Quickly embraced by the band's fans, the new boy had earned his spurs. But there was to be a twist in the tale. In 2016, Brian was forced to quit the band after being diagnosed with hearing loss, only to make a triumphant return to the band he loved with the release of 2020's smash hit album Power Up.
It's been a rollercoaster of a life, throughout which Brian's kept his feet firmly on the ground, never losing touch with his roots.

Warm, vivid, evocative, life-affirming and often laugh-out-loud funny, The Lives of Brian tells the story of one of our most well-loved performers in his own inimitable voice