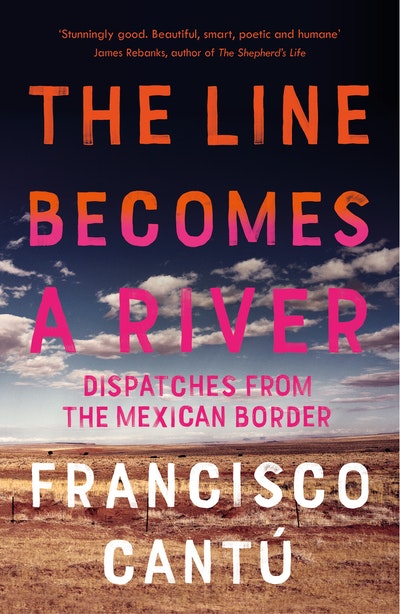 The Line Becomes A River

An electrifying memoir from a Mexican-American US Border Patrol guard

Shortlisted for the Orwell Prize for Political Writing 2019, an electrifying memoir from a Mexican-American US Border Patrol guard

In this extraordinary account, he describes his work in the desert along the Mexican border. He tracks humans through blistering days and frigid nights. He detains the exhausted and hauls in the dead. The line he is sworn to defend, however, begins to dissolve. Haunted by nightmares, Cantú abandons the Patrol for civilian life - but he soon faces a final confrontation with the world he believed he had escaped.

'A raw, compelling memoir. An eloquent rebuke to all those who look to build walls rather than bridges between people'
Sunday Times
'A must-read. A page-turning personal story that holds until the final page and wrenches long after'
GQ
'Remarkable. Lyrical and moving'
Guardian

Francisco Cantú was as an agent for the United States Border Patrol from 2008 to 2012, working in the deserts of Arizona, New Mexico, and Texas. A former Fulbright fellow, he is the recipient of a Pushcart Prize, a 2017 Whiting Award, and a 2018 Art for Justice fellowship. His writing and translations have been featured in The New York Times, Best American Essays, Harper’s,and Guernica,as well as on This American Life. He lives in Tucson and coordinates the Southwest Field Studies in Writing Program at the University of Arizona.

Praise for The Line Becomes A River

One of the perks of being a writer is you get sent proofs of books. Most are not for me but occasionally you get sent a gem. The Line Becomes a River is such a book. It is stunningly good. Beautiful, smart, raw, sad, poetic and humane… It’s the best thing I’ve read for ages

Lyrical and moving... Cantu describes the borderlands and his work there with a raw-nerved tenderness that seems to have been won from both the landscape and the violence he was implicated in. Told in three increasingly soul-searching parts, The Line Becomes a River frequently feels momentous... Remarkable

Tender, lyrical, and with a singular poise that is unsentimental and restrained, in prose as clear as desert air

[A] must-read memoir ... Cantú's skill as a writer proves an equal match for his material. A digestible account of US and Mexico relations, a nuanced portrait of Mexican cultural blessings and ills, The Line Becomes A River is a page-turning personal story that holds until the final page and wrenches long after.

A raw, compelling memoir… The Line Becomes a River offers an eloquent rebuke to all those who look to build walls rather than build bridges between people.

Humanity is the preoccupation of The Line Becomes a River—recognizing it, acknowledging it, salvaging it.

Cantú's sparsely poetic non-fiction debut is timely ... Radio 4's Book of the Week is brilliantly evocative of the starkly beautiful reaches of the desert and of the human stories behind the statistics. Alongside the personal dimension, Cantú intelligently explores the history and causes of Mexican immigration to America, and the US response.

[Cantú's] compelling, tragic account may help to break down the wall for others, too.

Opening the pages of The Line Becomes A River is like entering a new world.

[A] honest (and, not incidentally, beautifully written) evocation of one human experience.

Spare, graceful, and full of the details that propel a good story… His life on the line has made him the kind of expert we need to hear from.

Brilliantly evocative of the starkly beautiful reaches of the desert and of the human stories behind the statistics.

This beautiful and horrifying memoir should be required reading by anyone who feels that immigration is the nation’s number one issue right now.

A book that whips across your face like a sandstorm, embedding bits of the desert into your skin that, like it or not, you’ll carry forward.

Raw and timely confessional… A striking picture of the unsparing borderlands.

His lyrical asides about the border, from the history of its creation to quotations of poets who've written about it, are passionately delivered and speak to his urge to give nameless migrants an identity

This work may determine for future generations what building a wall does to magnify the heartache of plight and flight, of people moving between nation and nationality…without the agency to define it themselves.

There is a line dividing what we know and do not know. Some see the world from one shore and some from the other. Cantú brings the two together to a spiritual whole. My gratitude for this work of the soul.

Sandra Cisneros, author of THE HOUSE ON MANGO STREET

This book tells the hard poetry of the desert heart. If you think you know about immigration and the border, you will see there is much to learn. And you will be moved by its unexpected music

Cantú’s story, and intelligent and humane perspective, should mortify anyone who ever thought building a wall might improve our lot. He advocates for clarity and compassion in place of xenophobia and uninformed rhetoric. His words are emotionally true and his literary sensibility uplifting

Barry Lopez, author of ARCTIC DREAMS and OF WOLVES AND MEN

A beautiful, fiercely honest, and nevertheless deeply empathetic look at those who police the border and the migrants who risk – and lose -- their lives crossing it. In a time of often ill-informed or downright deceitful political rhetoric, this book is an invaluable corrective

The best book on immigration you will read this year

Francisco Cantu’s story is a lyrical journey that helps bridge the jagged line that divides us from them. His empathy reminds us of our humanity -- our immigrant history -- at a critical time.

A beautifully-crafted question; the answer has yet to be written.

Some sort of reckoning… Powerful and essential work.

An honest and moving memoir of human tragedy and systemic failings.

A quiet, thoughtful narrative ebbing and flowing in its description of the author’s experience as a US border patrol officer