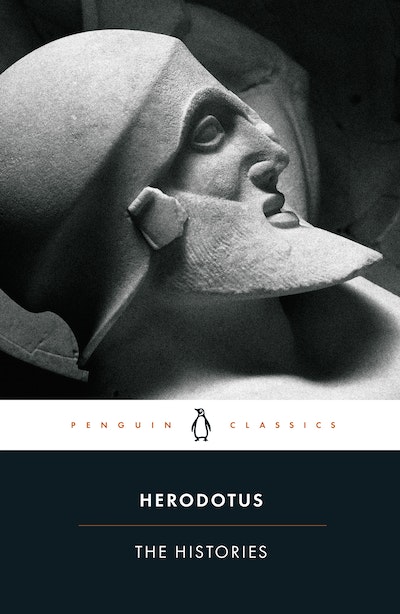 One of the great books in Western history and the very first work of non-fiction, in Tom Holland's compelling new translation

The work that established the study of history in the western world, Herodotus's The Histories is a dazzling contemporary account of the ancient world, translated from the Greek by Aubrey de Sélincourt, revised with an introduction and notes by John Marincola in Penguin Classics. 'No one is fool enough to choose war instead of peace - in peace sons bury fathers, but in war fathers bury sons'One of the masterpieces of classical literature, the Histories describes how a small and quarrelsome band of Greek city states united to repel the might of the Persian Empire. But while this epic struggle forms the core of his work, Herodotus' natural curiosity frequently gives rise to colourful digressions - a description of the natural wonders of Egypt; an account of European lake-dwellers; and far-fetched accounts of dog-headed men and gold-digging ants. With its kaleidoscopic blend of fact and legend, The Histories offers a compelling Greek view of the world of the fifth century BC.This celebrated translation of The Histories has been extensively revised and includes an updated bibliography, chronology, glossary and additional notes.A Greek historian, Herodotus (c.485-25 BC) left his native town of Halicarnassus, a Greek colony, to travel extensively. He collected historical, geographical, ethnological, mythological and archaeological material for his histories.If you enjoyed The Histories, you might like Tacitus' Annals of Imperial Rome, also available in Penguin Classics.

Few facts are known about the life of Herodotus. He was born around 490 BC in Halicarnassus, on the south-west coast of Asia Minor. He seems to have travelled widely throughout the Mediterranean world, including Egypt, Africa, the area around the Black Sea and throughout many Greek city-states, of both the mainland and the islands. A sojourn in Athens is part of the traditional biography, and there he is said to have given public readings of his work and been friends with the playwright Sophocles. He is said also to have taken part in the founding of the colony of Thurii in Italy in 443 BC. He probably died at some time between 415 and 410 BC. His reputation has varied greatly, but for the ancients and many moderns he well deserves the title (first given to him by Cicero) of 'the Father of History'.