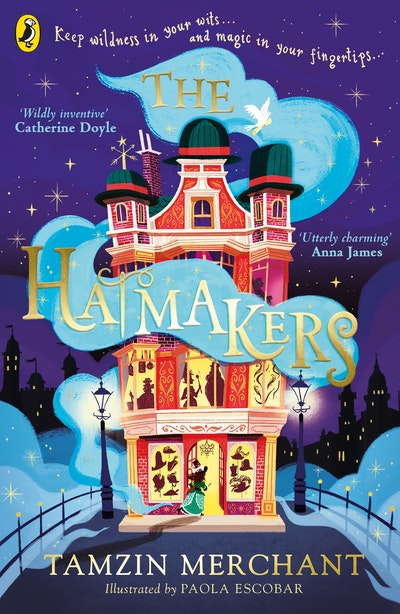 It was a wild and lightning- struck night. The kind of night that changes everything.

Jagged forks of light ripped across the sky and thunder rolled in tidal waves over the rooftops and spires of London. With the rain lashing down and the clouds crashing above, it felt like the whole city was under the sea.

But Cordelia Hatmaker was not afraid. In her candle-lit room at the very top of Hatmaker House, she was pretending to be aboard the Jolly Bonnet. The ship was being tossed by massive waves as she staggered across the deck (really her hearthrug), fighting a howling wind.

‘Batten down those hatches, Fortescue!’ she yelled. ‘I’ve got to lash myself to the wheel!’

A tin soldier stared blankly from the mantel. ‘Aye, aye, Cap’n!’ Cordelia squeaked, out of the corner of her mouth.

‘Enemy fire!’ Cordelia cried, seizing the back of her wooden chair and heaving. Under her hands it became a greatship’s wheel.

A violent gust of wind blew the window open. The candle sputtered out and Cordelia was plunged into darkness.

Echoing up the five storeys of Hatmaker House came the sound of somebody pounding on the front door.

Cordelia scrambled down the ladder from her bedroom and galloped along the top corridor. Aunt Ariadne emerged fromher chamber, wrapped in a plum-coloured velvet dressing gown. Uncle Tiberius appeared, grizzle-headed from sleep.

‘Father!’ Cordelia cried, skidding past them. ‘My father’shome!’

Cordelia raced down the spiral staircase that twisted through the middle of Hatmaker House. She hurtled past Great-aunt Petronella, snoozing in front of the flickering lilac fire in her Alchemy Parlour. She rushed past the tall doors of the Hatmaking Workshop and, deciding that sliding down the corkscrew bannister would be quickest, in three heartbeats she reached the bottom floor.

Her bare feet slapped the cold tiles of the hallway. She shook her head to chase away the dizziness and ran (in not quite a straight line because she was still a little giddy) across the wide hall to the door.

White light flared across the sky as she turned the hefty key in the lock. A tall figure loomed through the pebbly window.

A crack of lightning split the sky in two.

A man stood on the front step of Hatmaker House. He was drenched, ragged and gasping in the wind.

It was not her father.

Enter a spellbinding world in this soaring magical adventure, perfect for fans of Nevermoor, A Pinch of Magic and Rooftoppers.