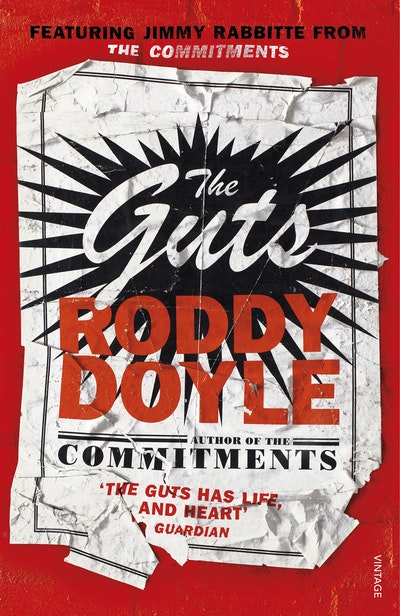 Jimmy Rabbitte is back.

The man who invented the Commitments back in the eighties is now forty-seven, with a loving wife, four kids ... and bowel cancer. He isn’t dying, he thinks, but he might be.

Jimmy still loves his music, and he still loves to hustle. On his path through Dublin he meets two of the Commitments – Outspan, whose own illness is probably terminal, and Imelda Quirk, still as gorgeous as ever.

This warm, funny novel is about friendship and family, about facing death and opting for life. 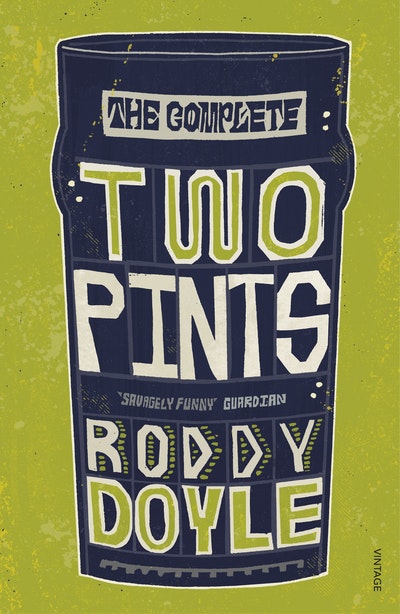 Praise for The Guts

A visceral tragicomedy – as raw and as funny as anything [Doyle’s] written.

Remarkable, relevant and, surprisingly for a book that’s ostensibly about cancer, joyful.

This is Doyle back in Barrytown and on top form, especially at the festival which closes a glorious book.

The Guts has life, and heart, and jokes.

The novel is probably the most contemplative that Doyle has written — as a meditation on the importance of family, it is at times almost unbearably moving.

Unchanged is Doyle’s miraculous ability to serve up dialogue that fizzes with great, often quite rude jokes – but never at the expense of the emotions lying behind them.

As one does with old friends, you leap right back into the conversation as if you’ve never been apart... It’s got a bittersweet humour all its own.

The novel is rich in sentiment and episodes conveying sentiment.

Smart, sly, raucous, outrageous and tender The Guts will have you cheering for Jimmy and his family and if you’re not already a fan of Doyle’s writing will surely make you one.

The biggest joy is Doyle's deftness with dialogue.

In The Guts, Doyle returns once more to those themes he has always written about so singularly: love and family. Doyle has never written anything that is not about love and its transformational power.

A big-hearted novel of family life in which bad things ultimately happen to other people.

As ever with Doyle, there’s wit, warmth and exuberant swearing found in even the toughest of situations.

Jimmy Rabbitte is 47 and potentially facing death, but ready to have a good time before doing it.

What it has…is a melancholy wisdom, and some moments of heartbreaking poignancy.

Doyle conjures up a genuine tenderness, empathy and humanity when he writes about family life.

A warm, rude and occasionally tender novel about friendship, family and facing death.

This is a bitter-sweet novel: a state-of-the-nation, state-of-the-age recession appraisal, and a loving portrayal of an imperfect, foul-mouthed, unstoppable, loving and lovable old bastard… [Doyle] packs more emotion into a simple ‘yeah’, or an ‘I know’ than many writers do into entire poetic speeches.

Think it's clear from The Guts that Roddy Doyle has written this one from the guts: it's frank and funny, it's about things that matter (love and family and friendship), and it crackles with feisty Dublin dialect and richly comic exchanges.

Lachyrymachismo. The art of being weepy and tough at the same time. This book has it in spades. Or rather buckets.

The great thing about Roddy Doyle is his ear for the demotic… The Guts is a good read.

Unsurprisingly, every bit as good as the original [The Commitments], Doyle is one of those rare writers who never disappoints

A life-affirming and triumphant return for Doyle. His book has just been named Novel of the Year at the Irish Book Awards.

Doyle’s ear for dialogue is as acute as ever and there’s a lot of amusing asides about contemporary life in this revisiting of much-loved characters.

A book full of Doyle's dark humour mixed with melancholy and wonderful moments of sheer madness.