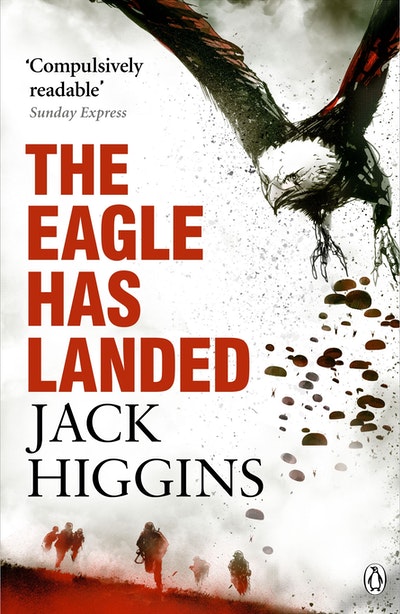 The Eagle Has Landed

In the early morning hours of 6 November 1943, SS Reichsfuhrer Heinrich Himmler receives the coded message he has been waiting for "The Eagle has landed."

It was to become known as the most daring enemy mission of the entire war: Operation Eagle, Himmler's audacious plan to kidnap Winston Churchill on British soil.

But, despite spectacular secrecy, there was to be no surrender without a fight ...

For in that remote corner of Norfolk, an elite unit is gathered together. Ready to do battle for a nation against the most ruthless task force ever assembled.

Since The Eagle Has Landed – one of the biggest-selling thrillers of all time – every novel Jack Higgins has written has become an international bestseller. He has had simultaneous number-one bestsellers in hardcover and paperback, and many of his books have been made into successful movies, including The Eagle Has Landed, To Catch a King, On Dangerous Ground, Eye of the Stormand Thunder Point.

Higgins, who lived in Belfast until he was twelve, had several close calls with bombs and gunfire at an early age. After leaving school at fifteen, he served three years with the Royal Horse Guards in Eastern Europe during the cold war. Subsequently, he was a circus roustabout, a factory worker, a truck driver, and a laborer, before entering college at age twenty-seven. He has degrees in sociology, social psychology, and economics from the University of London, and a doctorate in media from Leeds Metropolitan University.

A fellow of the Royal Society of Arts, and an expert scuba diver and marksman, Higgins lives on Jersey in the Channel Islands.

Praise for The Eagle Has Landed

Higgins is a master of his craft

A seasoned pro . . . Mr Higgins knows how to tell a story!

A thriller writer in a class of his own

The architect of the modern thriller

Unsurpassed by any adventure story in recent years

Alistair MacLean, author of The Guns of Navarone and Where Eagles Dare