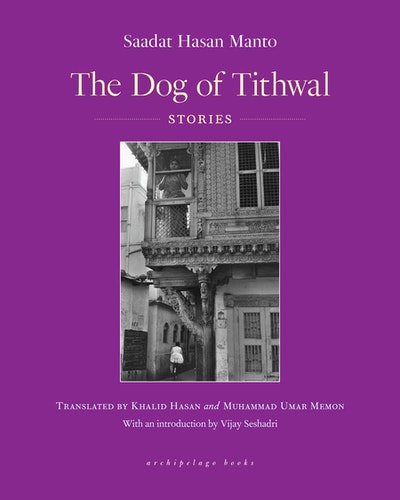 The Dog of Tithwal

Stories encircling the marginalized, forgotten lives of Bombay, set against the backdrop of the India-Pakistan Partition.

Fresh translations and by far the most comprehensive collection of stories by this 20th Century master available in English.

Saadat Hasan Manto conjures the vitality on the streets of Bombay--its prostitutes, pimps, gangsters, artists, writers, and strays. Also, the pain and bewilderment of the Hindus, Muslims, and Sikhs pitted against each other by the India-Pakistan partition. Deeply opposed to partition, Manto is best known for his dry-eyed portrayals of its violence, horrors, and absurdities. From a stray dog (with Hindu or Muslim leanings?) caught in the crossfire at the border of India and Pakistan, to friendly neighbors turned enemy soldiers pausing for tea together in a short cease fire--Manto blurs the edges of geographic, cultural, and social boundaries with an unflinching and satirical gaze, and a powerful humanism. With an introduction by Pulitzer Prize–winning poet Vijay Seshadri, this collection illuminates Manto's most vital and universal work, and—half a century later—remains a prescient text illuminating so many of the glaring and silenced conflicts that plague humanity today.