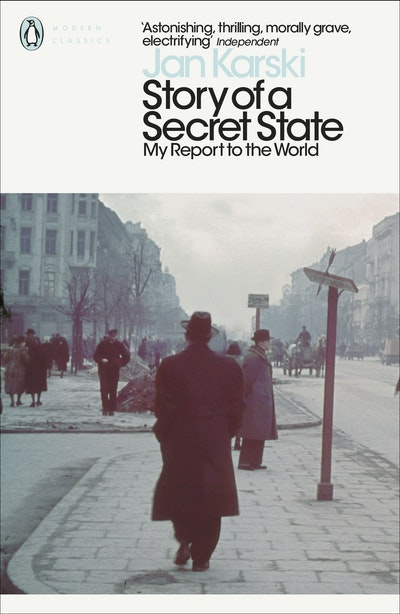 Story of a Secret State: My Report to the World

The incredible eyewitness account of wartime resistance, now in paperback

'Insistently asks the question: What would you do? Would you fight, or acquiesce, or collaborate? ... Karski was deeply patriotic and ludicrously brave ... an astonishing testament of survival' Ben Macintyre, author of Operation Mincemeat

It is 1939. Jan Karski, a brilliant young Polish student, enjoys a life of parties and pleasure. Then war breaks out and his familiar world is destroyed. Now he must live under a new identity, in the resistance. And, in a secret mission that could change the course of the war, he must risk his own life to try and save those of millions.

Karski was his nom de guerre; he had been born Jan Kozielewski, the youngest of eight children, in Lodz, Poland's second-largest city, on April 24, 1914. Karski was a liaison officer of the Polish underground, who infiltrated both the Warsaw Ghetto and a German concentration camp and then carried the first eyewitness accounts of the Holocaust to a mostly disbelieving Anthony Eden and Franklin Roosevelt.

Praise for Story of a Secret State: My Report to the World

His story deserves not just revival but reflection ... Karski's electrifying words still speak only too eloquently for themselves

Karski's exploration of the moral fog in which he and his colleagues operated ... made me recall thrillers like Man Hunt and Hangmen Also Die ... two episodes resemble scenes tantalisingly directed by Hitchcock ... Karski's account of the systematic brutality of the Nazi regime is literally chilling

The bravery of the man who risked all to tell the world about the Holocaust is truly staggering ... an extraordinary testament to Man's inhumanity to Man, and the even more remarkable courage required to resist it

Story of a Secret State is now viewed as a classic insider's account of the Resistance in occupied Europe...After all the harrowing descriptions of Holocaust horrors there have been over the years from survivors of Auschwitz, Belsen, and Ravensbruck, Karski's vivid account of what he saw back in 1942 is still deeply moving. We feel his shock and incredulity that this could really be happening in 20th century 'civilised' Europe.

His account of his missions is an electrifying tale of false identities, near captures, spies and secret film capsules ... in human terms, Karski's account is invaluable

It deserves its status as a Penguin Classic, not only because it is a great historic document, but also because it's a cracking good read: Karski's adventures are worthy of the wildest spy thriller

Jan Karski's Story of a Secret State stands in the absolute first rank of books about the resistance in World War II. If you wish to read about a man more courageous and honorable than Jan Karski I would have no idea who to recommend. Yes, it's that good.