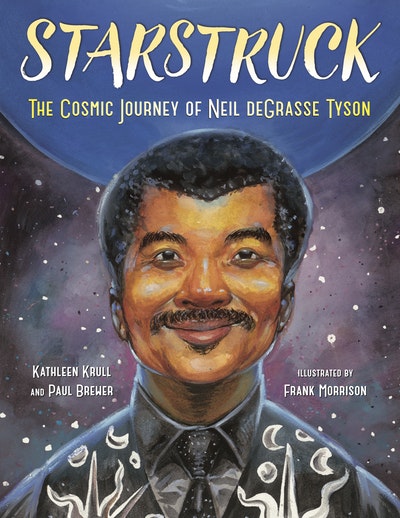 A picture-book biography about science superstar Neil deGrasse Tyson, the groundbreaking American astrophysicist whose work has inspired a generation of young scientists and astronomers to reach for the stars! Perfect for STEM curricula and readers of all ages.

Young Neil deGrasse Tyson was starstruck when he first visited the sky theater at the Hayden Planetarium in New York City. He couldn't believe the crowded, glittering night sky at the planetarium was real--until a visit to the country years later revealed the impossible.

That discovery was like rocket fuel for Neil's passion about space. His quest for knowledge took him from the roof of his apartment building to a science expedition in northwest Africa, to a summer astronomy camp beneath a desert sky, and finally back home to become the director of the Hayden Planetarium, where it all began. Before long, Neil became America's favorite guide to the cosmos.

This story of how one boy's quest for knowledge about space leads him to become a star astrophysicist is perfect for young readers who are fascinated by the universe, aspiring scientists, and the dreamer in all of us. It will ignite your own sense of wonder.

Kathleen Krull is the author of Harcourt’s popular “Lives of . . .” series and the award-winning Wilma Unlimited: How Wilma Rudolph Became the World’s Fastest Woman. The author lives in San Diego, CA.

"A stellar biography for young readers who have their eyes on the stars." —School Library Journal, starred review "An informative and entertaining title for aspiring young scientists." —Kirkus Reviews "Inspirational and informative, this will make a popular addition to biography and STEM collections." —Booklist "This uplifting biography captures its subject’s relatability, natural curiosity, and infectious enthusiasm for science." —Publishers Weekly "Krull distills Tyson’s infectiousness for a picture book audience" —The Bulletin