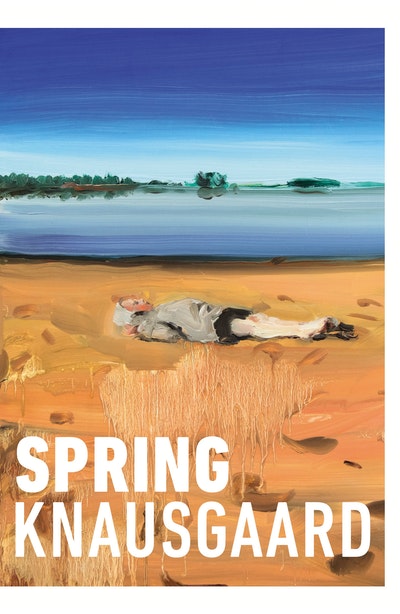 Spring is a deeply moving novel about family, our everyday lives, our joys and our struggles, beautifully illustrated by Anna Bjerger.

Spring is a deeply moving novel about family, our everyday lives, our joys and our struggles, beautifully illustrated by Anna Bjerger.
'Moving... A circadian novel, set over one day... Entirely ingenious' Daily Telegraph

Spring follows a father and his newborn daughter through one day in April, from sunrise to sunset. It is a day filled with the small joys of family life, but also its deep struggles. With this striking novel in the Seasons quartet, Karl Ove Knausgaard reflects uncompromisingly on life's darkest moments and what can sustain us through them.

'Fall in love with the world, Knausgaard enjoins, stay sensitive to it, stay in it' New York Times

Anna Bjerger was born in 1973 and is a Swedish artist who lives and works outside Älmhult in Småland, Sweden. She was educated at Central Saint Martins and the Royal College of Art in London and has exhibited regularly in Sweden and internationally since the early 2000s.

Heavy but not heavy-handed, this true noir of the North is dark, bleak and moody. This story about life that's set over the course of single day will move and disturb in equal measure.

Oodles of musing on life and art that's by turns meandering and electrifying.

An unexpected treat. A lovely piece of work.

Entirely ingenious. Knausgaard isn't afraid to be gauche, anxious, vulgar, inconsistent, portentous, sentimental. He makes virtues of what, in literary novels, are often counted faults. And he makes them moving.

[Karl Ove Knausgaard] observes a subject so closely, mining so far into its essence - its quiddity - that the observations transcend banality and become compelling.

A radical, thrilling departure from the first two volumes of his Seasons Quartet... this moving novel stylistically resembles his acclaimed My Struggle series... A remarkably honest take on the strange linkages between love, loss, laughter, and self-destruction, a perfect distillation of Knausgaard's unique gifts.

For anyone who is curious about this writer... Spring makes for an excellent introduction. It is the shortest book he has ever written, but it is all muscle, a generous slice of a thoughtful, ruminative life.

If you still haven't tried Knausgaard... try Spring. It's poignant and beautiful. you'll get him and get why some of us have gone crazy for him.

Spring features Knausgaard unbound. . . the book's blunt, unforced telling brings the larger project's meaning into sudden, brilliant focus. Knausgaard has assembled this living encyclopedia for his daughter with a wild and desperate sort of love, as a way to forge her attachment to the world, to fasten her to it... Fall in love with the world, he enjoins, stay sensitive to it, stay in it.

Knausgaard's assets are on full display, including his precise writing style and his unerring sense of detail . it is all muscle, a generous slice of thoughtful, ruminative life.