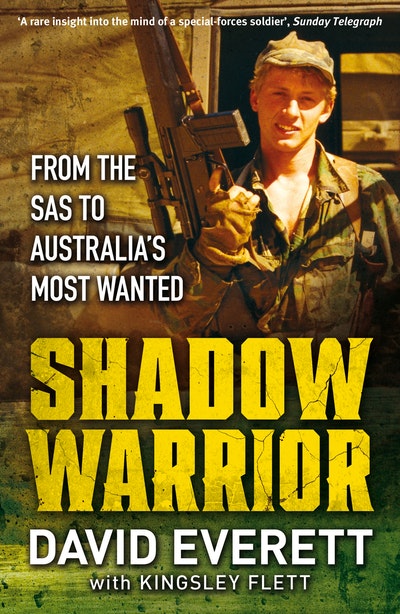 Shadow Warrior: From the SAS to Australia's Most Wanted

This is the true story of David Everett:
renegade soldier, outlaw and fugitive.

As SAS soldier bord with life in the Regiment during peace-time, Dave was lured to the jungles of Burma by the promise of seeing action.  There, he became swept up in a war between the Burmese military junta and the oppressed Karen people.  Dave learned very quickly about fighting, loyalty and bravery.  Back in Australia on a mission to raise funds for the Karen, he soon became every government's nightmare: a highly skilled commando on a crime spree.  He kidnapped people from their homes, robbed movie theatres and set off the biggest explosion in Australian criminal history.  At the height of his infamy, Dave had every cop in the country on the lookout for him.

Part larrikin, part enigma, Dave Everett has everyone divided.  Is he a freedom fighter or a trained killer on the loose?  A baby-faced everyday bloke or a 'lethal war-machine'?  A champion of the oppressed or a ruthless criminal?  Written during his time in jail, Shadow Warrior is an inside look at a world that thriller writers and Hollywood can only imagine.

'A remarkable story' The Australian

David Francis Everett was born in Tasmania in 1962. He joined the army at age fifteen, and the Australian SAS Regiment at twenty-one. He left the army in 1986, and went on to have various adventures, a few of which have inspired Shadow Warrior, his first book. He now lives 'out bush' in Australia's vast north.