An electrifying collection of stories from the febrile imagination of a young writer who traverses culture, genre and form.

A man grows tired of his open-plan office and builds a fort made of stationery. A woman’s euphoria at finally achieving Desktop Zero is quickly replaced with despair. A group of copywriters dream of being poets, and a disillusioned sales executive overthinks his think piece.

In the mind-bendingly upside-down world of Sadvertising, iPhones have feelings, brands come to life, creative directors disappear into parallel universes and lowly freelancers become immortal. It’s a world where gods, ghosts and muses stalk the corridors of bland and placeless offices, and the wondrous exists alongside the mundane.

Short, punchy and direct, Ennis Cehic’s satirical fables are box-fresh and shot through with pitch-black humour, existential dread and late capitalist yearning for meaning. They grapple with love and loneliness, art and commerce, dream and reality, and reflect the absurdity of the modern condition.

Sadvertising is a surreal, subversive and utterly contemporary literary debut from an unforgettable new voice.

Ennis Cehic is a writer whose work focuses on ideas of displacement, creativity and existentialism.

His writing, including essays, fiction and memoir, has been published in a variety of literary journals and publications including Meanjin, Assemble Papers, Going Down Swinging and others.

In 2018 Ennis was selected as an inaugural recipient of the Wheeler Centre's Next Chapter writers' scheme by judges Christos Tsiolkas, Benjamin Law, Maxine Beneba Clarke and Ellen van Neerven. He was mentored by Nam Le.

He is the author of New Metonyms, a literary photography book about his homeland Bosnia & Herzegovina, released with photographer Shantanu Starick in 2020.

Since 2007, Ennis has been working in the advertising industry as a copywriter, brand strategist and creative director.

He lives and works between Melbourne and Sarajevo. 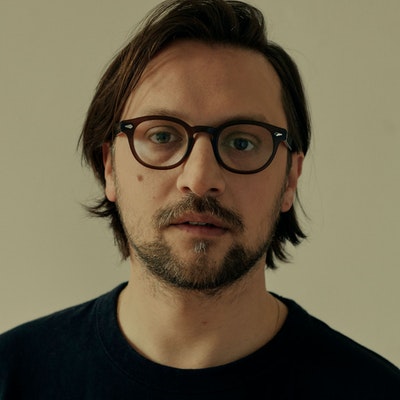 Funny, smart, crazy, audacious, and above all humane, this book marks the deeply unusual arrival of a singular new talent.

Sadvertising is a tonic, a work of thrilling, audacious verve and wit, capturing the absurdity of the hyperconnected world in which we live. Cehic’s intelligence and humour are singular, and his playful love for the possibilities of language is exhilarating. Often in reading his book I wanted to stand up and burst into spontaneous applause. And why not? Sadvertising deserves a standing ovation.

Part-satire, part-lament for all that humanity has already lost to the digital netherworld, these are shimmering, bittersweet fables of the age of advertising and ego-curation in which we live. Reading this book might open up a portal to the multiverse - as actually happens to one of the unforgettable characters - but I promise it will be worth it, even if you never find your way back home.

An unsettling, bad-arse book with a big heart. Clever, cool, funny and very, very strange. Ennis Cehic is a remarkable writer with a bright future.

George Saunders meets Bohumil Hrabl meets Ben Marcus meets your creative account manager. Pointed and wry, Sadvertising layers the mundane with the frankly, brazenly bizarre, and in doing so makes strange, and particular, the deadening spaces in which they so often meet: the office, the screen, the motivational poster. Ennic Cehic does it all with a gentle kind of knowing. I loved this collection.

With scathing wit and black humour, Sadvertising offers hope and ennui in equal measure, and challenges readers to interrogate how, and what, they consume.