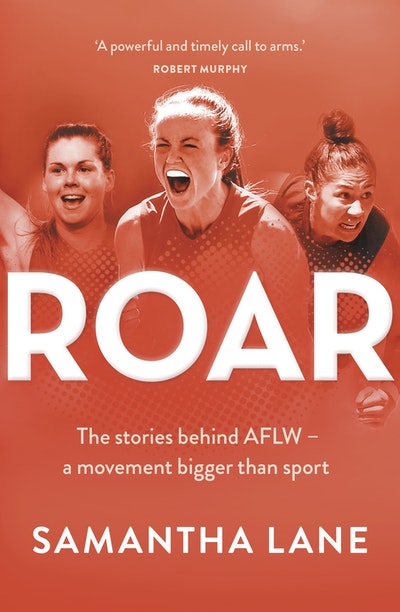 The stories behind AFLW – a movement bigger than sport

‘When a football ground was electrified on that unforgettable February evening, feelings did not need words. They had a sound unlike anything anyone had ever heard: an almighty, heartfelt roar.’

The inaugural season of the AFL Women’s league was a game changer for Australian sport and for Australia culturally. When women joined the nation’s biggest and most popular sporting code as players, it gave them licence to become legitimate football heroes. It was personal, political, proud and powerful.

With unique insights from award-winning journalist Samantha Lane, including previously untold details behind AFLW’s birth, ROAR tells the remarkable tales of a group of trailblazers. These are intimate stories from a band of pioneers who now have a league of their own.

From Daisy Pearce, AFLW’s original poster-player, to Craig Starcevich, the Collingwood premiership footballer who found football happiness where he least expected it, and superstars including Tayla Harris and history-making coach Bec Goddard, ROAR is a groundbreaking book to inspire, illuminate and celebrate the leading lights of AFLW.

Sam Lane has written a book that will remain timely, for it addresses some fundamental societal issues through the prism of football. It also profiles a group of individuals who have pursued their individual passions in the face of general indifference, and seen that passion become the vehicle for potentially life-changing opportunities. Collectively and individually, these are stories with a long way to run.