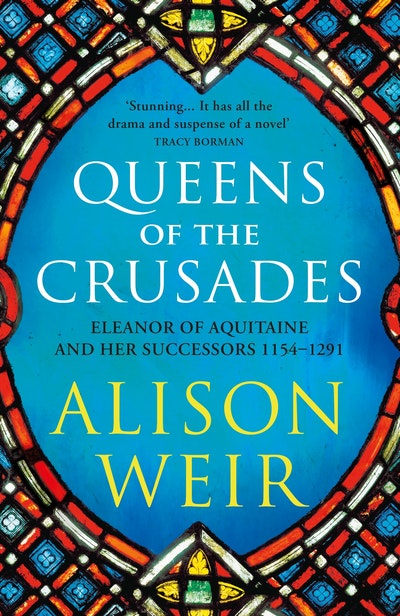 Queens of the Crusades

Eleanor of Aquitaine and her Successors

The next volume in Alison Weir's magisterial history of the queens of Medieval England - including the life of Eleanor of Aquitaine, the subject of Alison's most successful book.

Read the next volume in Alison Weir's magisterial history of the queens of Medieval England - including the life of Eleanor of Aquitaine.

The Plantagenet queens of England played a role in some of the most dramatic events in our history. Crusading queens, queens in rebellion against their king, queen seductresses, learned queens, queens in battle, queens who enlivened England with the romantic culture of southern Europe - these determined women often broke through medieval constraints to exercise power and influence, for good and sometimes for ill.

Alison Weir's ground-breaking history of the queens of medieval England now moves into a period of even higher drama, from 1154 to 1291: years of chivalry, dynastic ambition, conflict with the church, baronial wars, and the all-pervading bonds of feudalism. We see events such as the murder of Becket, Magna Carta and the birth of parliaments from a new perspective. Her narrative begins with the formidable Eleanor of Aquitaine, whose marriage to Henry II establishes a dynasty which rules for over three hundred years and creates the most powerful empire in western Christendom - but also sows the seeds for some of the most destructive family conflicts in history and for the collapse, under her son King John, of England's power in Europe. The lives of Eleanor's successors were just as remarkable: Berengaria of Navarre, queen of Richard the Lionheart, Isabella of Angoulême, queen of John, and Alienor of Provence, queen of Henry III, and finally Eleanor of Castile, the grasping but beloved wife of Edward I.

Through the story of these first five Plantagenet queens, Alison Weir provides an enthralling new perspective on a dramatic period of high romance and sometimes low politics, with determined women at its heart.

Praise for Queens of the Crusades

[A] historian who has achieved popularity without sacrificing scholarly precision... She writes with the dramatic intensity of a novelist.

The book that I most anticipated this year was Alison Weir's Queens of the Crusades... Told with all of Weir's characteristic verve and exceptional eye for detail, this book should find its way into every history lover's Christmas stocking.

Stunning... [Weir has] brought those five queens to life like never before. I just raced through it - it has all the drama and suspense of a novel.

As in previous books, the exceedingly knowledgeable author's prodigious research is impressive. Another treat for Weir fans.

This meticulous group biography of the first five Plantagenet queens of England brushes away long-standing legends. Weir skillfully documents the political, religious, and cultural issues of medieval England and France.