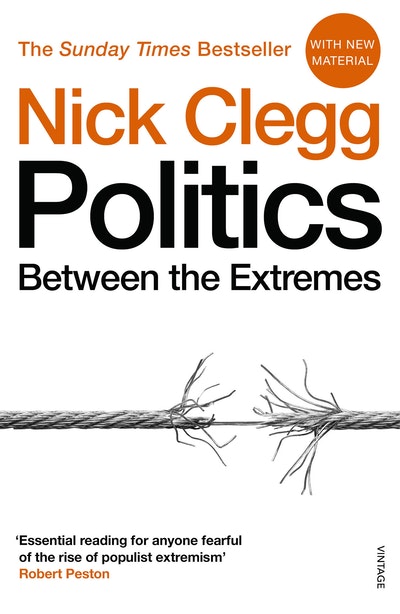 A cautionary tale. An exposé. A defence of the centre ground. An appeal to reason. A call to arms. An honest account from the top and bottom of British politics.

Politics has changed. For decades Britain was divided between Left and Right but united in its belief in a two-party state. Now, with nationalism resurgent and mainstream parties in turmoil, stark new divisions define the country and the centre ground is deserted.

Nick Clegg witnessed this change from the inside. Here he offers a frank account of his experiences and puts the case for a new politics based on reason and compromise.

He writes candidly about the tense stand-offs within government and the decision to enter coalition with the Conservatives in the first place. He also lifts the lid on the arcane worlds of Westminster and Brussels, the vested interests that suffocate reform, as well as the achievements his party made despite them.

Whatever your political persuasion, if you wish to understand politics in Britain today you cannot afford to ignore this book.

Nick Clegg was Leader of the Liberal Democrats for eight years from 2007 and Deputy Prime Minister from 2010 to 2015. As well as being the Liberal Democrat MP for Sheffield Hallam, he was previously MEP for the East Midlands. Nick and his wife Miriam were married in her home town in Spain in 2000 and have three young sons – Antonio, Alberto and Miguel. He speaks five languages.

A compelling account from the inside of the strange, sad death of liberal Britain. This is a passionate plea for the centre ground, which has never seemed so remote (or precious) in our current political dispensation

This is an important book: a revealing analysis of British politics today and why it urgently needs reform

It’s impossible not to warm to Clegg on the basis of this book. He’s human and humane, honest about his faults but insistent that liberalism still has everything to offer in a fractured culture

This isn’t just a memoir of government … lots of considered and rational observations on how we run our society and economy … good ideas about how the civil service and the British constitution might be improved … Clegg does have qualities that are admirable, both in a politician and in a human being. He’s honest about his mistakes, and examines in detail how his failures to understand the political game made his Liberal Democrats so horribly vulnerable at last year’s election … fluent and chatty … thoughtful

Engagingly frank and wry … still as upbeat about the future of liberal politics as he was in 2009 … Political memoirs are often used to settle scores. Clegg’s is subtly different … He takes full and rueful responsibility … good, helpful and public-spirited … This book isn’t an attack on his coalition partners, it is about ensuring the Liberal Democrats get the recognition they deserve when the second draft of history is written … Clegg was undoubtedly right to believe that in agreeing to be alongside the Tories in a government that would implement three-quarters of the Lib Dem’s manifesto, he was doing a rational, noble thing … Clegg analyses without rancour

This is not a doleful book … soul-baring and commendably candid about his mistakes, but also a spirited defence … Despite his own battering experience, Clegg remakes the case for multi-party governments and pragmatic compromise in an age of populists preaching ideological purities … If he is correct, this honest and thoughtful book has some useful advice

Fascinating and readable ... writes with candour and insight about the human cost of high office ... a stark and salutary reminder of the ruthlessness of the Conservatives in seeking and retaining power and their certainty about the entitlement to rule ... This is a lesson [Labour] - amid its present tribulations - would do well to reflect on

Perhaps [Cameron and Osborne] might admit it now, but their government was more stable and socially just with Nick Clegg at their side. Having to consult the Liberal Democrats produced better, more considered government

This thoughtful memoir is also an analysis of the future of progressive politics.

In retrospect, Cleggmania, fuelled by a pent-up hunger for change, was the benign early forerunner of what would become the Trump, Brexit and Corbyn movements, and Clegg's account of how unnerving it was to experience that from the inside is fascinating. His take on the futility of trying to reason with voters in the grip of powerful emotions ... feels prescient too. If you only have time for two political books this year, this and [Aaron] Banks's together catch the zeitgeist