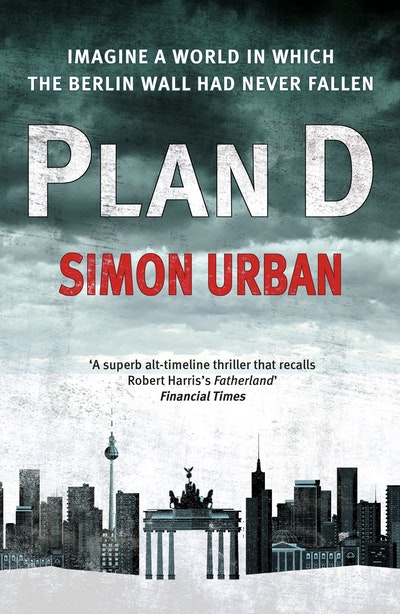 Imagine a world in which the Berlin Wall never fell... A modern-day Cold War thriller: Robert Harris’s Fatherland meets John le Carré’s The Spy Who Came in from the Cold.

October 2011. While West Berlin enjoys all the trappings of capitalism, on the crowded, polluted, Eastern side of the Wall, the GDR is facing bankruptcy. The ailing government's only hope lies in economic talks with the West, but then an ally of the GDR’s chairman is found murdered – and all the clues suggest that his killer came from within the Stasi.

Detective Martin Wegener is assigned to the case, but, with the future of East Germany hanging over him, Wegener must work with the West German police if he is to find the killer, even if it means investigating the Stasi themselves. It is a journey that will take him from Stasi meeting rooms to secret prisons as he begins to unravel the identity of both victim and killer, and the meaning of the mysterious Plan D.

Plan D is a gripping thriller and a thought-provoking alternative history in the vein of Robert Harris’s Fatherland and John le Carré’s The Spy Who Came in from the Cold.

Simon Urban was born in Hagen in 1975. He studied German literature at the University of Munster, and creative writing at the Deutsches Literaturinstitut in Leipzig, and his short stories have earned him numerous prizes. He lives in Hamburg and Techau (East Holstein) and currently works as a copywriter for a leading German creative agency.

Simon Urban has created an imaginative alternate landscape that is so absurdly believable I had to remind myself, occasionally, that it wasn't the real world. And all was the backdrop to a conspiracy, wrapped in secrets, covered in deception. Compulsive reading, I devoured it

This is my surprise hit of the year so far, and I can’t recommend it highly enough

It has everything you could wish for in a good thriller