My Family and Other Communists 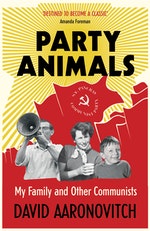 A revelatory memoir by one of Britain’s best-known journalists

David Aaronovitch grew up in Communist Great Britain – a Britain hidden from view for most, but for those on the inside it was a life filled with picket lines, militant trade unions, solidarity rallies for foreign Communists, the Red Army Choir, copies of the Daily Worker, all underpinned by a quiet love of the Soviet Union.

In this idiosyncratic blend of memoir, history and biography, David Aaronovitch uncovers the story of his family’s life by picking through letters, diaries and secret service files, which in turn unleash vivid childhood memories of a lost and idealistic world. Party Animals is about personal life and political life becoming tragically intertwined, and one family’s search for meaning in the twentieth century.

“An affectionate and insightful account of 20th-century history that also amounts to a manifesto for the power of words – and belonging.”

“Compassionate and wise… An effervescent and essential writer.”

“David Aaronovitch is to be congratulated on his Le Carre like sleuthing into the deceits and self-delusions of his parents and their communist friends. He has produced a wise, funny and sometimes heart-breaking account of how otherwise good and nice people are capable of believing a load of total and utter b*ll*cks about the world, the class system and themselves. It is an invocation of a vanished tribe that is still relevant, alas, to the Britain of Jeremy Corbyn, Ken Livingstone and Owen Jones, I loved it.”

“Party Animals is an utterly engaging and truly humane story about fitting in, opting out, and finding meaning. Unflinchingly honest, it is by turns harrowing and hilarious. Not since Clive James's Falling Towards England has there been a memoir so clearly destined to become a classic in its own time.”

“David Aaronovitch has written a compelling account of the Communist mindset in post-war Britain: a superb mix of social history, Marxist philosophy and often painful family biography. It is a hugely revelatory insight into a lost world and its modern legacies.”

“A colourful, sentimental, damning and funny part-history, part-autobiography. That is, until an extraordinarily brutal final chapter… [that] reveals Party Animals to be more than just a revealing memoir, but, hopefully, Mr Aaronovitch’s catharsis.”

“Deeply personal… A clever and moving portrait of a strange, unexplored subculture, of dedicated self-education by desperately poor young men, of undoubtedly good causes adopted for the advancement of a wicked and dangerous purpose.”

“A rich and forensic examination, all the more uncomfortable for its honesty and the authoritative knowledge of Left-wing politics that Aaronovitch brings to it … Like Lorna Sage’s Bad Blood, this is a riveting autobiography that forces you to think about your own family history.”

“An uncommonly gripping book, not just as political or social history…but as an account of the lies that families tell themselves to survive.”

“An honest portrait of communist obsession… A stirring personal yet expansive history of the ideals his committed communist parents strived towards… Aaronovitch fuses his adolescent memories with historical landmarks in the communist way of life… A memoir’s reach is too narrow, a historical biography’s too vast. Party Animals is a smart and well-balanced mix.”

“In his closely observed memoir…Aaronovitch has concentrated both the tragedy and comedy of western communism into a family, his own… The description Aaronovitch gives of his family and of the Party community is rich, subtle and poignant… The best thing he has done.”

“Aaronovitch’s song of love and pain for the lost family of British communism.”

“By turns affectionate, brutal and hilarious.”

“A sensitive analysis of his own family.”

“A raw and perspicacious book [written] with the honesty and elan that readers of his Times column admire.”

“The book shows how deep the religious impulse is in human beings… His memoir is a salutary lesson in the human craving for a cause to believe in – and the wrong paths such a craving can take.”

“Party Animals is… a moving account of a tormented family, a tale of rigid disbelief and dishonesty that was sometimes domestic and sometimes spanned the globe.”

“In this fascinating memoir, Aaronovitch describes what it was like growing up in a family of Communists… It’s a witty, sad and extremely moving story.”

“David Aaronovitch tells the story of his upbringing in a fervently Communist household in a very engaging and witty style… An unusual blend of history and biography and it shows what can happen when personal and political life becomes entwined.”