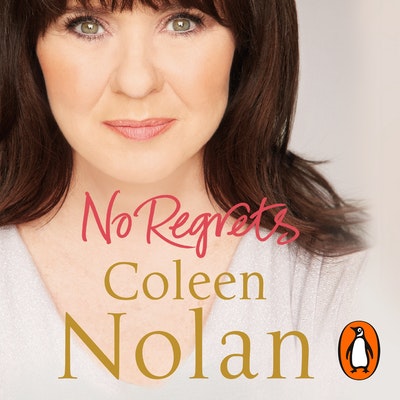 As a member of the Nolan sisters, Coleen Nolan was born into the spotlight and has stayed there ever since. She has now become one of the nation's favourite TV presenters and is used to newspapers and magazines claiming to have the inside story of her private life. In No Regrets Coleen finally reveals the truth of what really happened during the last few rollercoaster years, truly the worst of her life.

Whilst it's certainly been a traumatic time for the whole family, Coleen is a survivor. First and foremost, she is a mum and is determined to hold her family together.

The Nolans finally put aside their infamous feud to rally round their beloved sister Bernie, who tragically lost her fight with cancer on the 4th of July last year, aged just 52. In this memoir, Coleen movingly describes her struggle to deal with the emotional scars that come from losing someone so close and the effect it has had on her own life.

Coleen also confesses the secret that she has been hiding from prying eyes: her second marriage and 'happy ever after' with musician Ray Fensome was pushed to breaking point by a series of rows and separations. Here, for the first time, Coleen reveals how she has battled to save her marriage and stop her family from being torn apart.

In this incredibly candid memoir, Coleen writes with raw honesty about her family troubles, her career highs and lows, and her struggle with her body image. In recent years, Coleen has found herself in both a plastic surgeon's office looking at a £20,000 bill to 'fix her face' and at a breast cancer clinic asking for the removal of her healthy breasts to avoid becoming the fourth sister in the family to be struck down by cancer.

Wonderfully warm and moving, and brilliantly funny and honest, No Regrets will take you from laughter to tears and back again as you share in Coleen's very personal journey.