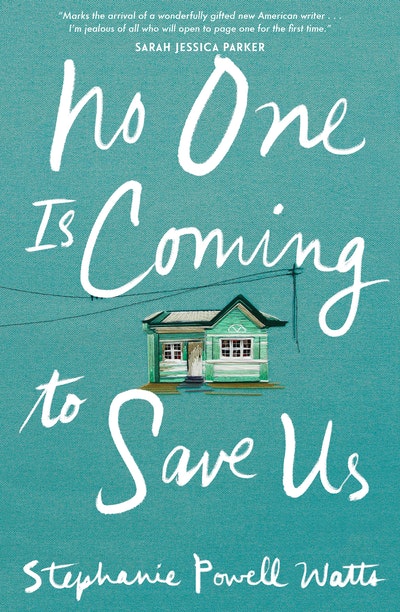 No One Is Coming to Save Us

A riff on The Great Gatsby for Trump’s America, No One is Coming to Save Us is an exciting debut novel and the first pick for Sarah Jessica Parker’s new book club.

"A grand debut novel full of characters who come into a reader's mind and heart and never leave. Stephanie Powell Watts is a writer of wondrous skill, imagination, and sensitivity, and No One Is Coming to Save Us is a beautiful testament to that." Edward P. Jones, author of The Known World

JJ Ferguson has returned home to Pinewood, North Carolina, to build his dream house and to pursue his high school sweetheart, Ava. But as he re-enters his former world, where factories are in decline and the legacy of Jim Crow is still felt, he’s startled to find that the people he once knew and loved have changed just as much as he has.

Ava is now married and desperate for a baby, though she can’t seem to carry one to term. Her husband, Henry, has grown distant, frustrated by the demise of the furniture industry, which has outsourced to China and stripped the area of jobs. Ava’s mother, Sylvia, caters to and meddles with the lives of those around her, trying to fill the void left by her absent son. And Don, Sylvia’s unworthy but charming husband, just won’t stop hanging around.

JJ’s return—and his plans to build a huge mansion overlooking Pinewood and woo Ava—not only unsettles their family, but stirs up the entire town. The ostentatious wealth that JJ has attained forces everyone to consider the cards they’ve been dealt, what more they want and deserve, and how they might go about getting it. Can they reorient their lives to align with their wishes rather than their current realities? Or are they all already resigned to the rhythms of the particular lives they lead?

"A powerful—and, in today's world, necessary—perspective on the American dream and the possibility of beginning again." Celeste Ng, author of Little Fires Everywhere

Stephanie Powell Watts is an associate professor of English at Lehigh University, and has won numerous awards, including a Whiting Award, a Pushcart Prize, the Ernest J. Gaines Award for Literary Excellence, and the Southern Women’s Writers Award for Emerging Writer of the Year. She was also a PEN/Hemingway finalist for her short-story collection We Are Taking Only What We Need.

Praise for No One Is Coming to Save Us

A grand debut novel full of characters who come into a reader’s mind and heart and never leave. Stephanie Powell Watts is a writer of wondrous skill, imagination and sensitivity, and No One Is Coming to Save Us is a beautiful testament to that.

Rich with wry and poignant observations on human nature, family, and black experience in America. A powerful – and, in today’s world, necessary – perspective on the American dream and the possibility of beginning again.

Celeste Ng, author of Everything I Never Told You

Inspired by The Great Gatsby, Watts loosely (masterfully, too) retells the American saga from the present day perspective of a once thriving African American community, breathing fresh life into a classic in a way that feels more essential, more moving than the original.

They say if you love something, you should set it free. Not so in Stephanie Powell Watts’ powerful debut novel . . . This timely novel sheds its green light on economic and emotional heartbreak and the spaces where the living meet the dead.

Watts’ lyrical writing and seamless floating between characters’ viewpoints make for a harmonious narrative chorus . . . Ultimately, Watts offers a human tale of resilience and the universally understood drive to hang on and do whatever it takes to save oneself.

No One Is Coming to Save Us proves to be not just a pleasure on its own terms, but also a compassionate and well-timed social commentary, wherein people like us endeavor, falter, and finally endure.