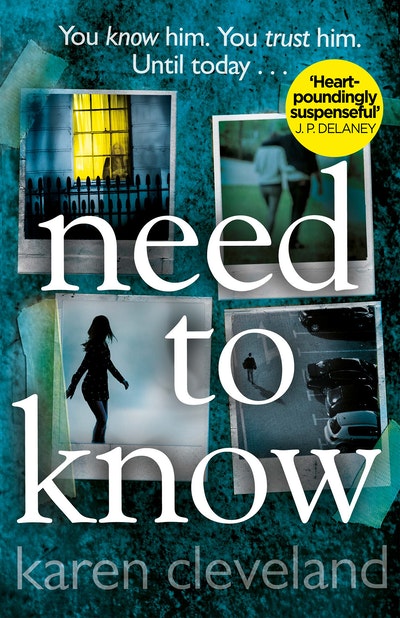 'You won't be able to put it down!' Shari Lapena, author of THE COUPLE NEXT DOOR

I stand in the doorway of the twins’ room and watch them sleep, peaceful and innocent, through crib slats that remind me of bars on a prison cell.

A night-light bathes the room in a soft orange glow. Furniture crowds the small space, far too much of it for a room this size. Cribs, one old, one new. A changing table, stacks of diapers still in their plastic. The bookcase Matt and I assembled ourselves, ages ago. Its shelves now sag, overloaded with the books I could recite by heart to the older two, the ones I’ve been vowing to read more often to the twins, if only I could find the time.

I hear Matt’s footsteps on the stairs and my hand clenches around the flash drive. Tight, like if I squeeze hard enough, it’ll disappear. Everything will go back to the way it was. The past two days will be erased, nothing more than a bad dream. But it’s still there: hard, solid, real.

The hallway floor creaks where it always does. I don’t turn. He comes up behind me, close enough that I can smell his soap, his shampoo, the smell of him that’s always been oddly comforting, that now inexplicably makes him more of a stranger. I can feel his hesitation.

The words are quiet, but the sound is enough to stir Chase. He sighs in his sleep and then settles, still curled into a ball, like he’s protecting himself. I’ve always thought he’s so much like his father, the serious eyes, taking everything in. Now I wonder if I’ll ever truly know him, if he’ll keep secrets so heavy they’ll crush anyone close to him.

Matt takes a step closer, puts a hand on my arm. I move away, enough to free myself from his touch. His hand lingers in the air, then falls to his side.

I look at the other crib, at Caleb, on his back in his footed pajamas; cherubic blond curls, arms and legs splayed like a starfish. His hands are open, his pink lips open. He has no idea how vulnerable he is, how cruel the world can be.

I always said I’d protect him. I’d give him the strength that he lacks, make sure he has every opportunity, keep his life as normal as possible. How can I do that, if I’m not around?

I would do anything for my kids. Anything. I uncurl my fingers and look at the flash drive, the little rectangle, nondescript. So small, but with so much power. Power to fix, power to destroy.

Rather like a lie, when you think about it.

‘You know I don’t have a choice,’ I say, and I force myself to look at him, my husband, the man I know so well, and at the same time not at all.

I hear Matt’s voice, words anyone would dread, but a tone that’s reassuring. Light, apologetic. It’s something unfortunate, sure, but it’s manageable. Anything truly bad and his voice would be heavier. He’d use a complete sentence, a complete name. I have some bad news, Vivian.

I hold the phone to my ear with a raised shoulder, swivel my chair to the other side of the L-shaped desk, to the computer centered under gray overhead bins. I guide the cursor to the owl-shaped icon on the screen and double-click. If it’s what I think it is – what I know it is – then I only have a bit longer at my desk.

‘Ella?’ I say. My gaze drifts to one of the crayon drawings tacked to the high cubicle walls with pushpins, a pop of color in this sea of gray.

I close my eyes and take a deep breath. We’ve been expecting it. Half her class has been sick, falling like dominoes, so it was only a matter of time. Four-year-olds aren’t exactly the cleanliest bunch. But today? It had to happen today?

‘Just the temp.’ He pauses. ‘Sorry, Viv. She seemed fine when I dropped her off.’

I swallow past the tightening in my throat and nod, even though he can’t see me. Any other day and he’d pick her up. He can work from home, at least in theory. I can’t, and I used up all my leave when the twins were born. But he’s taking Caleb into the city for the latest round of medical appointments. I’ve been feeling guilty for weeks that I’ll have to miss it. And now I’ll be missing it and still using leave I don’t have.

‘I’ll be there in an hour,’ I say. The rules say we have an hour from the time they call. Factoring in the drive and the walk to my car – it’s in the outer reaches of Langley’s sprawling parking lots – that gives me about fifteen minutes to wrap up work for the day. Fifteen minutes less leave to add to my negative balance.

I glance at the clock in the corner of my screen – seven minutes past ten – and then my eyes shift to the Starbucks cup beside my right elbow, steam escaping from the hole in the plastic lid. I treated myself, a splurge in celebration of the long-awaited day, fuel for the tedious hours ahead. Precious minutes wasted in line that could have been spent digging through digital files. Should have stuck to the usual, the sputtering coffee maker that leaves grounds floating at the top of the mug.

‘That’s what I told the school,’ Matt says. ‘School’ is actually our day care center, the place where our youngest three spend their days. But we’ve been calling it school since Luke was three months old. I’d read it could help ease the transition, lessen the guilt of leaving your baby for eight, ten hours a day. It didn’t, but old habits die hard, I guess.

There’s another pause, and I can hear Caleb babbling in the background. I listen, and I know that Matt’s listening, too. It’s like we’re conditioned to do so at this point. But it’s just vowel sounds. Still no consonants.

‘I know today was supposed to be a big day …’ Matt finally says, and trails off. I’m used to the trailing off, the evasive conversations on my open line. I always assume someone’s listening in. The Russians. The Chinese. That’s part of the reason Matt’s the first one the school calls when there’s a problem. I’d rather him filter some of the kids’ personal details from the ears of our adversaries.

Call me paranoid, or just call me a CIA counterintelligence analyst.

But really, that’s about all Matt knows. Not that I’ve been trying in vain to uncover a network of Russian sleeper agents. Or that I’ve developed a methodology for identifying people involved in the highly secretive program. Just that I’ve waited months for this day. That I’m about to find out if two years of hard work is going to pay off. And if I stand a chance at that promotion we desperately need.

‘Yeah, well,’ I say, moving my mouse back and forth, watching Athena load, the cursor in the shape of a timer. ‘Caleb’s appointment is what’s important today.’

My eyes drift back to the cubicle wall, the bright crayon drawings. Ella’s, a picture of our family, stick arms and legs protruding straight from six round happy faces. Luke’s, a bit more sophisticated, a single person, thick jagged scribbles to color in hair and clothing and shoes. MOMMY, it says in big capital letters. From his superhero phase. It’s me, in a cape, hands on my hips, an S on my shirt. Supermommy.

There’s a familiar feeling in my chest, the pressure, the overwhelming urge to cry. Deep breaths, Viv. Deep breaths.

‘The Maldives?’ Matt says, and I feel the hint of a smile creep to my lips. He always does this, finds a way to make me smile when I need it most. I glance at the photograph of the two of us on the corner of my desk, my favorite from our wedding day, almost a decade ago. Both of us so happy, so young. We always talked about going somewhere exotic for our ten-year anniversary. It’s certainly not in the cards anymore. But it’s fun to dream. Fun and depressing at the same time.

‘I could live with that.’ He hesitates, and in the gap I hear Caleb again. More vowel sounds. Aah-aah-aah. In my head, I’m calculating the months Chase has already been making consonant sounds. I know I shouldn’t – all the doctors say I shouldn’t – but I am.

‘Bora Bora?’ I hear from behind me, faux-incredulous. I put my hand over the mouthpiece of the phone and turn. It’s Omar, my FBI counterpart, an amused expression on his face. ‘That one might be hard to justify, even for the Agency.’ He breaks into a grin. Infectious as ever, it brings one to my own face, as well.

‘What are you doing here?’ I say, my hand still covering the mouthpiece. I can hear Caleb babbling in my ear. O’s this time. Ooh-ooh-ooh.

‘Had a meeting with Peter.’ He takes a step closer, perches on the edge of my desk. I can see the outline of his holster at his hip, through his T-shirt. ‘The timing may or may not have been a coincidence.’ He glances at my screen and the grin fades ever so slightly. ‘It was today, right? Ten A.M.?’

I look at my screen, dark, the cursor still in the shape of a timer. ‘It was today.’ The babbling in my ear has gone quiet. I roll my chair so that I’m turned, just a touch, away from Omar and remove my hand from the mouthpiece. ‘Honey, I have to go. Omar’s here.’

‘Love you, too.’ I set the phone down on its base and turn back to Omar, who’s still sitting on my desk, denim-clad legs outstretched, feet crossed at the ankles. ‘Matt says hi,’ I tell him.

‘Aaah, so he’s the Bora Bora connection. Planning a vacation?’ The grin’s back, full force.

‘In theory,’ I say with a half-hearted laugh. It sounds pathetic enough that I can feel color rise to my cheeks.

He looks at me for a moment longer, then thankfully down at his wrist. ‘All right, it’s ten-ten.’ He uncrosses his ankles, crosses them the opposite way. Then leans forward, the excitement on his face unmistakable. ‘What have you got for me?’

Omar’s been doing this longer than I have. A decade, at least. He’s looking for the actual sleepers in the U.S., and I’m trying to uncover those running the cell. Neither of us has had any success. How he’s still so enthusiastic never fails to amaze me.

‘Nothing yet. I haven’t even taken a look.’ I nod at the screen, the program that’s still loading, then glance at the black-and-white photograph tacked to my cubicle wall, beside the kids’ drawings. Yury Yakov. Fleshy face, hard expression. A few more clicks and I’ll be inside his computer. I’ll be able to see what he sees, navigate around the way he does, pore through his files. And hopefully prove that he’s a Russian spy. 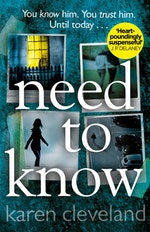 You know him. You love him. You trust him. Until today . . . For fans of GONE GIRL and THE COUPLE NEXT DOOR, NEED TO KNOW is the most relentless psychological thriller you will read all year.