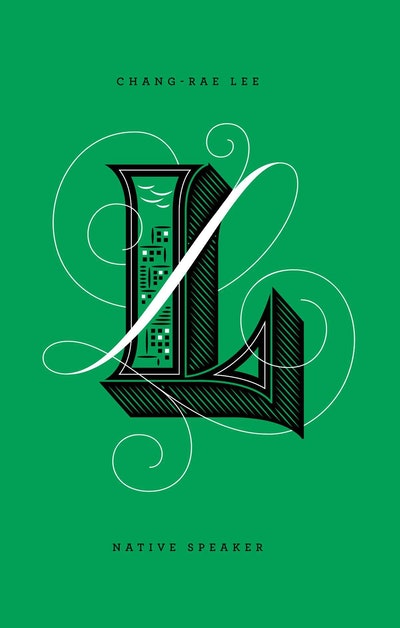 Chang-Rae Lee's first novel Native Speaker is a raw and lyrical evocation of the immigrant experience and of the question of identity itself.

It all begins with a letter. Fall in love with Penguin Drop Caps, a new series of twenty-six collectible and hardcover editions, each with a type cover showcasing a gorgeously illustrated letter of the alphabet. In a design collaboration between Jessica Hische and Penguin Art Director Paul Buckley, the series features unique cover art by Hische, a superstar in the world of type design and illustration, whose work has appeared everywhere from Tiffany & Co. to Wes Anderson's recent film Moonrise Kingdom to Penguin's own bestsellers Committed and Rules of Civility. With exclusive designs that have never before appeared on Hische's hugely popular Daily Drop Cap blog, the Penguin Drop Caps series launches with six perennial favorites to give as elegant gifts, or to showcase on your own shelves.

L is for Lee. Korean American Henry Park is 'surreptitious, B+ student of life, illegal alien, emotional alien, Yellow peril: neo-American, stranger, follower, traitor, spy…' or so says his wife, in the list she writes upon leaving him. Henry is forever uncertain of his place, a perpetual outsider looking at American culture from a distance. And now, a man of two worlds, he is beginning to fear that he has betrayed both and belongs to neither. Chang-Rae Lee's first novel Native Speaker is a raw and lyrical evocation of the immigrant experience and of the question of identity itself.