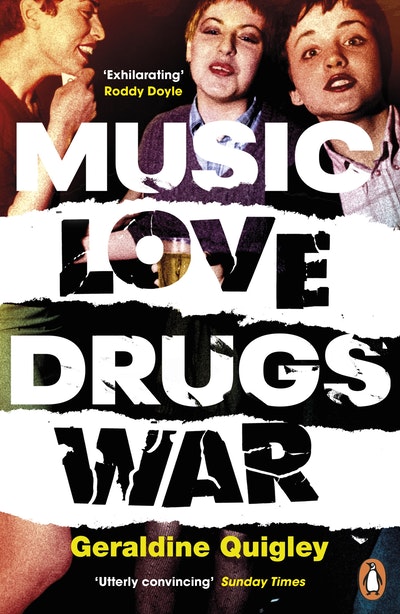 A poignant coming-of-age novel about friendship, innocence and war

School is almost over - and for Paddy, Liz, Christy and Kevin it's time to figure out what's next. But before they start the rest of their lives, these teenagers have the 'Cave' - a place to drink, smoke, flirt and listen to punk music. Somewhere to fend off the spectre of the future.

Because this is Derry in 1981, and the streets outside are a war zone. So when a friend is killed, suddenly the choices of who to be and what side to be on are laid starkly before them. New loves and old loyalties are imperiled even as whole lives hinge on a single decision . . .

Warm but also unsettling and exhilarating. That's some feat, but Geraldine Quigley has managed to make it seem easy

A poignant and powerful coming-of-age story

A sensitive and powerful coming-of-age novel

i newspaper's Best New Books for 2019

Both funny and moving, Music Love Drugs War is a poignant coming-of-age novel ... pitches tender depictions of friendship and love against the stark backdrop of war, hunger strikes, rioting and plastic bullets

If you happened to like Derry Girls, you're in for a treat with Music Love Drugs War

A vivid debut. Geraldine's depiction of what could draw ordinary kids into a paramilitary organisation feels utterly convincing . . . her dialogue feels sparky and alive