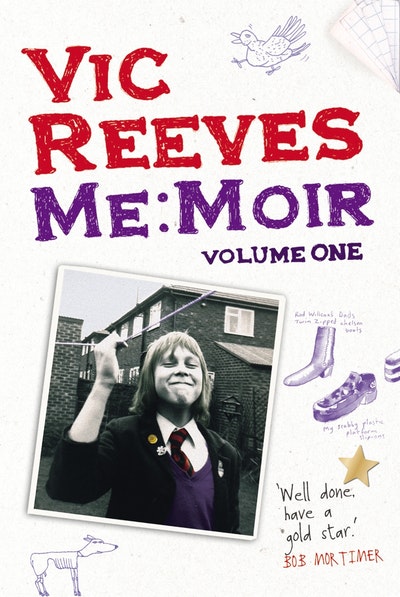 Me Moir - Volume One

Enter the hilarious world of the boy who would be Reeves

Before there was Vic Reeves, there was a boy called James Moir who was much the same as any other lad.Obsessed with owning a pet crow, a master at writing his name and terrified of his father's immense moustache. Growing up in Yorkshire and then CountyDurham, the boy who would be Reeves somehow managed to escape the attentions of 'Randy Mandy' and get a crash course in pig castration, before having encounters with Jimi Hendrix and the Yorkshire Ripper.

Peopled with weird and wonderful characters, Vic Reeves' memoir is authentic, witty and inventive, and as unique as you'd expect from one of Britain's most exceptional comedy talents.

Vic Reeves is one of the UK's most popular comedians. His TV successes with Bob Mortimer have included Vic Reeves Big Night Out, The Smell of Reeves and Mortimer, Shooting Stars and Families at War. Praise for Me Moir - Volume One

One of the great pleasures of this book is his description of life in the hairy Seventies; of discovering David Bowie, Grand Funk Railroad, prog rock and Yes.

This is both a touching and fascinating memoir... a great read told in the comedian's wickedly witty humour

Unlike the current glut of misery memoirs, his book... is a funny, positive read.

Well done, have a gold star