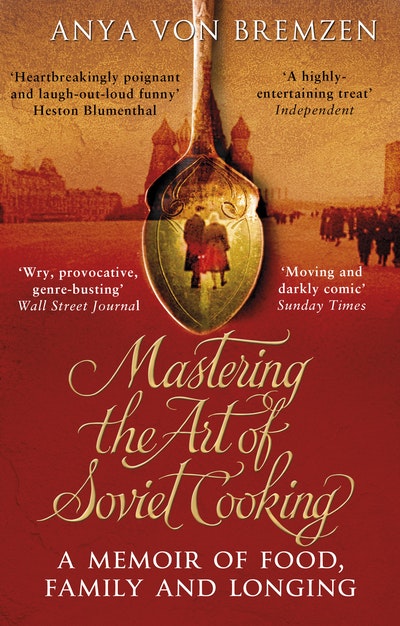 Mastering the Art of Soviet Cooking

Born in a surreal Moscow communal apartment where eighteen families shared one kitchen, Anya von Bremzen grew up singing odes to Lenin, black-marketeering Juicy Fruit gum at school, and longing for a taste of the mythical West. It was a life by turns absurd, drab, naively joyous, melancholy and, finally, intolerable. In 1974, when Anya was ten, she and her mother fled to the USA, with no winter coats and no right of return. These days, Anya is the doyenne of high-end food writing. And yet, the flavour of Soviet kolbasa, like Proust's madeleine, transports her back to that vanished Atlantis known as the USSR .

In this sweeping, tragicomic memoir, Anya recreates seven decades of the Soviet experience through cooking and food, and reconstructs a moving family history spanning three generations. Her narrative is embedded in a larger historical epic: Lenin's bloody grain requisitioning, World War II starvation, Stalin's table manners, Khrushchev's kitchen debates, Gorbachev's disastrous anti-alcohol policies and the ultimate collapse of the USSR. And all of this is bound together by Anya's sardonic wit, passionate nostalgia and piercing observations. Mastering the Art of Soviet Cooking is a book that stirs the soul as well as the senses.

Anya von Bremzen has been many things: as a child in the Soviet Union, she was the granddaughter of the former head of Naval intelligence, and thus a bona fide member of the nomenklatura; she was also the daughter of a disaffected dissident; a child actress; a piano prodigy.Then, because of a medical condition and political repressions in Brezhnev-era Russia, she and her mother became émigrés, to America. Eventually, when an injury ended her career as a concert pianist, she reinvented herself as an accomplished food writer, winning three James Beard awards for her international cookbooks and magazine work on behalf of Travel & Leisure, where she's been a contributing editor for over a decade, and for a number of other magazines. Now, she's the doyenne of high-end food travel writing, a master at putting a fine gloss on high cuisine wherever she finds it.

Praise for Mastering the Art of Soviet Cooking

Heartbreakingly poignant and laugh-out-loud funny. This is an important book, a must read!

By turns funny, tragic and nostalgic, this is a wonderful, fascinating volume, which puts a human face on the grim pages of the history books

This poignant memoir is an education in the richness of eastern European cuisine, and the story of Soviet communism, through the lens of family experience.

Absorbing... a social history of the Soviet Union cast through the prism of food

You will read few better books about food, family, exile or the Soviet tragedy—and none, I'll bet, which combines all those themes this magically. Funny, angry, ingenious and moving.

The culinary memoir has lately evolved into a genre of its own... But Anya von Bremzen is a better writer than most of the genre's practitioners, as this delectable book, which tells the story of postrevolutionary Russia through the prism of one family's meals, amply demonstrates… von Bremzen moves artfully between historical longshots...and intimate details. The descriptions of meals are delightful...

One-of-a-kind … Breathtaking feats of raconteurial skill... Mastering the Art of Soviet Cooking is not only a magic tablecloth, it’s a magic carpet that revisits the roads and lanes of the former Soyuz, surveying the tales of hardship and hardwon joys of von Bremzen’s relatives and the Russian people…

I don't think there's ever been a book quite like this; I couldn't put it down. Warm, smart and completely engaging... this is a book you won't forget

Ruth Reichl, author of Tender at the Bone

a monumental but deeply human book that reads like a great Russian novel, filled with dark humor and nostalgia. It opens up an entire universe, teaching us about the many deep meanings of food: cultural, political, social, historical, personal. It is also an utterly magical journey into a rich, mysterious land of totalitarian tyranny, and a portrait of a courageous, passionate people.

von Bremzen has conjured up the Proustian aromas of her Soviet life for her enjoyable ‘foodoir’... perceptive and funny on the subtleties of life under Soviet rule and in exile.

Through a kaleidoscopic mix of family life, politics, history, and jokes, von Bremzen evokes in her book a whole Soviet-era world of deprivation and delight.

A delicious, intelligent book. When I read it, I can taste the food but also the melancholy, tragedy, and absurdity that went into every bit of pastry and borscht

a rich, zesty history of family life in the USSR.

Most Westerners imagine Stalinist Russia as a food desert...Although this view has plenty of truth, it lacks nuance and humanity, as von Bremzen reveals so eloquently in this memoir...[Von Bremzen] shows the personal side of Soviet life, recounting the terror of war and secret police as well as the power of human resilience.

Turns a bittersweet eye and an intelligent heart on Soviet history through food... Beautifully told

Von Bremzen knows how to tell a story - poignant, funny but never lacking

An ambitious food memoir that is also a meticulously researched history of the Soviet Union... a meditation on culinary nostalgia

A painstakingly researched and beautifully written cultural history but also the best kind of memoir... A breathtaking balancing act... Von Bremzen is as much a virtuoso in her writing as her mother is in her cooking

My heart gladdened at the sight of Anya Von Bremzen's book. This is history at a personal level, the kitchen table

[Von Bremzen] is a profoundly gifted writer, able to lace information with observation, observation with wit...[this book] feels rather like a novel, richly populated and filled with deft dialogue, yet it's also crammed full of history

Much more a work of family memory than a practical cookbook or a historical survey... in which colours, textures and aromas open into often gut-wrenching recollections

One of the most unexpectedly pleasurable reads this year... funny, intimate, evocative and rueful

a monumental but deeply human book that reads like a great Russian novel, filled with dark humor and nostalgia. It opens up an entire universe, teaching us about the many deep meanings of food: cultural, political, social, historical, personal. It is also an utterly magical journey into a rich, mysterious land of totalitarian tyranny, and a portrait of a courageous, passionate people.

You will read few better books about food, family, exile or the Soviet tragedy—and none, I'll bet, which combines all those themes this magically. Funny, angry, ingenious and moving