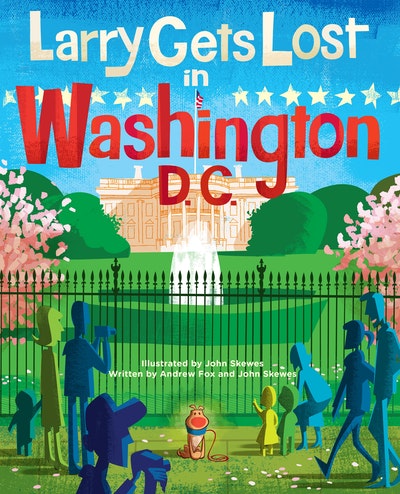 Larry Gets Lost In Washington, Dc

The newest adventure in the Larry Gets Lost series of best-selling children’s books (over 100,000 copies sold) highlights one adorable dog’s adventures in Washington, DC. Larry is a precocious pup who loves to go on vacation with his owner Pete and the family. In his latest adventure, they visit the nation’s capital, Washington, DC, where Larry, as usual, gets separated from the family when he’s lured away by the scent of something yummy! As he searches DC for Pete, Larry discovers the city’s greatest landmarks, including the Lincoln Memorial, the White House, the Jefferson Memorial, the Smithsonian, the Beltway, the Supreme Court, and the Lincoln Memorial Reflecting Pool, among others. But will he find Pete and be reunited with the family? And most important of all, will he come snout-to-snout with the beloved First Dog? Filled with charming retro illustrations, the Larry Gets Lost in Washington, DC, is an educational and fun tour of our nation’s capital.

Andrew Fox was born in 1964 and grew up inNorth Miami Beach, Florida. He attended LoyolaUniversity in New Orleans, where he studied socialwork and wrote a fantasy play for visually-handi-capped children that involved the audience rubbingtheir hands on a vaseline-coated foam rubber mer-maid's tail and sniffing spoiled sardines. He hasworked as manager of the Louisiana CommoditySupplemental Food Program, a federally-fundedmonthly nutrition program for low-income seniorcitizens. In 1995, following the death of his cousinin the French Quarter on New Year's Eve due to afalling bullet, he helped found the New Year Coali-tion, an advocacy group that helps educate the pub-lic about the dangers of celebratory gunfire. Also in1995, he joined a monthly writing workshop found-ed by award-winning SF author George AleeEffinger.