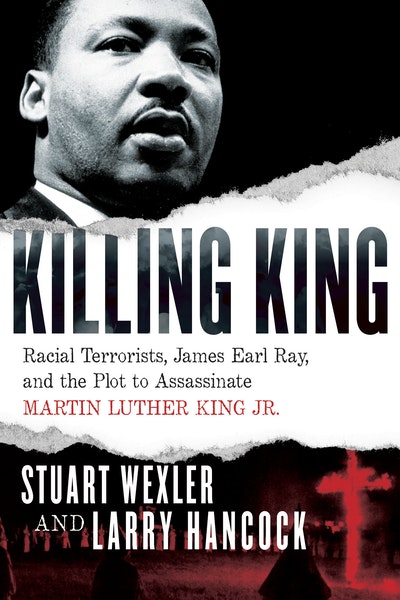 Published in time for the 50th anniversary of Dr. Martin Luther King Jr.’s assassination, Killing King uncovers previously unknown FBI files and sources, as well as new forensics to convincingly make the case that King was assassinated by a long–simmering conspiracy orchestrated by the racial terrorists who were responsible for the Mississippi Burning murders.

This explosive book details the long–simmering effort by a group of the nation’s most violent racial terrorists to kill Dr. Martin Luther King Jr. Killing King convincingly makes the case that while James Earl Ray was part of the assassination plot to kill King, the preponderance of evidence also demonstrates a clear and well–orchestrated conspiracy.

Thoroughly researched and impeccably documented, the book reveals a network of racist militants led by Sam Bowers, head of the White Knights of the Ku Klux Klan of Mississippi, who were dedicated to the cause of killing King. The White Knights were formed in the cauldron of anti–integrationist resistance that was Mississippi in the early 1960s and were responsible for more than three hundred separate acts of violence, including the infamous Mississippi Burning murders. The authors have located previously unknown FBI files and sources that detail a White Knight bounty offer, information from an individual who carried money for the assassination, and forensics information regarding unmatched fingerprints and an audio recording of an admission that a key suspect obtained a weapon to be used in killing King.

For years, Americans have debated issues with this crime. With Killing King, we are ever closer to an accurate understanding of how and why Dr. King was killed.

Praise for Killing King “This book provides an eye–opening, well–researched new perspective on King’s murder.” —Publishers Weekly (starred review) “A fascinating and disturbing look at complexities underlying a shameful historical epoch.” —Kirkus Reviews “In this intricately woven, impressively researched, and painstakingly delineated analysis, investigative researchers Wexler and Hancock place King’s assassination and its investigation by a sometimes woefully inept FBI within the racial and cultural mores of the time. Published to coincide with the 50th anniversary of Dr. King’s death, this elaborately documented examination of one of the defining crimes of the twentieth century brings new light to a dark period in the nation’s history.” —Booklist Praise for The Awful Grace of God “A timely study.” —Kirkus Reviews “A step in the [right] direction of a better understanding of a national tragedy.” —Booklist Praise for America's Secret Jihad “[Wexler] convincingly makes the case that America has been victimized by significant domestic terrorism for over half a century... He links atrocities familiar (the Oklahoma City bombing in 1995) and less so (attacks on synagogues in the South during the 1950s) to paint a disturbing picture with practical implications for the War on Terror... Wexler's deliberate and critical review of the evidence is also likely to prompt reconsideration of the possibility of wider conspiracies behind Martin Luther King Jr.'s assassination and the Atlanta child murders of 1979–1981.” —Publishers Weekly (starred review) “An impassioned investigative report tracing a deeply religious theme to the spate of civil rights violence from the 1950s until today. With urgency and zeal... Wexler carefully differentiates the religiously motivated extremists from the merely white supremacists... [A] compelling study.” —Kirkus Reviews “[T]his book is a fascinating attempt to see beyond conventional narratives and reveal an overlooked facet of religious terrorism.” —Library Journal “Stuart Wexler has done a wonderful service to those ignorant of the fact that Islamic fundamentalism does not own the copyright on terrorism. By shining light on religious terrorism in the U.S., Wexler shows us that human nature is capable of the most vile acts when ignorance and extremism is allowed to flourish.” —Tigre Hill, director of The Shame of a City “Stuart Wexler's brilliant new book is a major contribution to recent American history. On one level he provides the first coherent overview of a dangerous white anti–Semitic insurrectionary movement in the last half of the 1900s. He shows for example how this movement's sizable bounty offer is probably a key to the assassination of Martin Luther King. Just as importantly, Wexler analyzes the FBI's dilemmas in breaking this movement, between acting too soon (and failing to assemble a winnable case) and acting too late (allowing a crime to occur). A similar dilemma arises from the FBI's reliance on informants, protection of whom has encouraged a distorted prosecution of movement terrorists as loners. Wexler's analysis throws important new light on the Birmingham Church bombing of 1963, the King assassination, and the Oklahoma City bombing of 1995. Both the research in this book (much of it his own) and Wexler's insightful interpretations set a new standard for future scholars in this important field.” —Peter Dale Scott, author of The American Deep State: Wall Street, Big Oil, and the Attack on U.S. Democracy